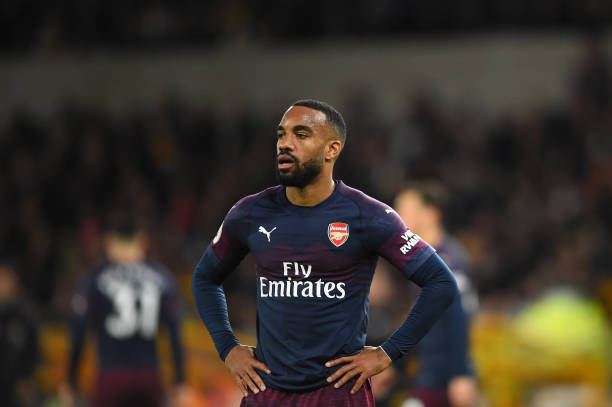 Arsenal lost 3-1 against Wolverhampton and the gunners are now at the risk of not playing in the UEFA Champions League next season but what exactly went wrong in this game? Well some of our favourite players dissapointed us so let’s take a look at how they were embarrassing.

Alexandre Lacazette has saved Arsenal many times this season but it has to be said; He let Arsenal down in the game against Wolverhampton because he failed to give the hosts any trouble in the final third throughout the whole 90 minutes.

Yes Lacazette was isolated because of Wolves’ great defensive game plan but he however wasted the few chances that he got like the one in the first half where he sent the ball way high above the bar when he had a clear eye on the goal. Had he scored using that chance, the gunners would have equalised since the home side was still leading by one goal.

It was not surprise that Wolves played a defensive game because that’s the same way they have been playing like that this season against the top six sides but the Arsenal fans were confident that they would tear apart the defence of the home side since they have Mesut Ozil who is known to be good at opening up the defences of opponents with his glamorous passes. So did we see any defence splitting passes yesterday? The answer is no.

Mesut Ozil might have been awful as everyone but we always expect more from him because it’s his job to try to open up defences of teams that play defensively like how Manchester City’s Kevin De Bruyne does on a weekly basis when he is fully fit.

So it seems like Unai Emery has decided that Nacho Monreal will be playing as a left back if the gunners are using a back four. Monreal was in the starting eleven since the gunners used a back four but what was frustrating is that the Spaniard wasn’t impressive in defending and going forward because age is catching up to him, and it’s no longer a secret that he also needs to be replaced in the summer.

Nacho Monreal gave away the free kick which gave Wolves their first goal of the day and he failed to combine well with Alex Iwobi as how the Nigerian international always does with Kolasinac.

Unai Emery reveals how they will recover their confidence