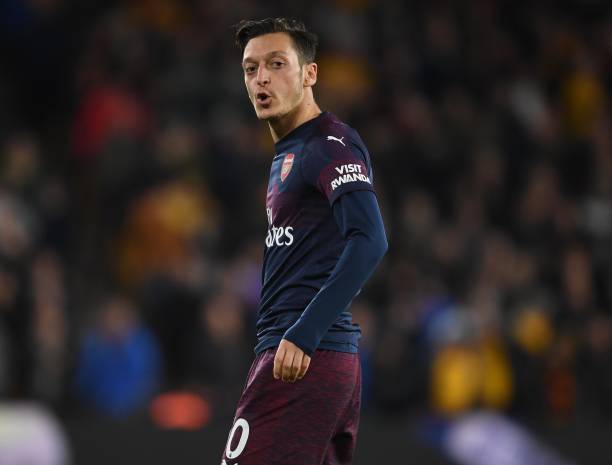 Arsenal has traveled to Leicester for their epic encounter with the Foxes at the King Power Stadium and there has surprisingly been unconfirmed reports which claim that Mesut Ozil wasn’t on the team bus which could mean that the German international was left at home by Unai Emery.

Mesut Ozil didn’t look to be injured in Arsenal’s 3-1 loss against Wolverhampton and these reports of him not being in the match day squad could be true since the pictures of the players in their final training session showed that the former Real Madrid star didn’t take part in it. It is however weird how Mesut Ozil will not be in the match day squad that will face Leicester City yet the club did not disclose this information in its latest team news ahead of the Leicester City game.

There’s however a possibility that Mesut Ozil could have been injured in training when the club had already released its team news hence Unai Emery deciding to leave him in London in other for him to receive more treatment so that he is hopefully back for their match against Valencia at the Emirates Stadium on Thursday next week.

Another possibility is that Unai Emery deliberately did not include Mesut Ozil in the match day squad that will face Leicester City because he doesn’t believe in him to impress in this game since he has always been poor in the away matches. The Arsenal boss did do this a few months back but Mesut Ozil fought his way back into the starting eleven but maybe his performance against Wolves has made Unai Emery to change his mind about him. The club will certainly release an official statement as to why Ozil isn’t in the squad before the game.