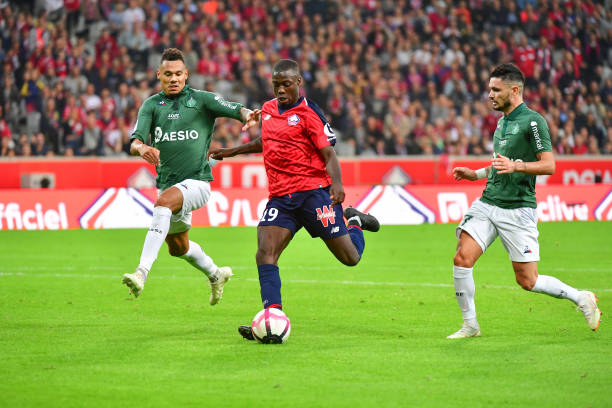 Arsenal has been linked with a move for Lille attacker Nicolas Pepe for a long time and with their recent match not going their way on Sunday, we take a look at a player that would drastically improve the squad of the gunners.

Nicolas Pepe is an outstanding winger because he can score and make assists and the gunners did have a player who was like that but he is now currently at the Manchester United bench after he decided to betray the North Londoners. The loss of Alexis Sanchez has now made the gunners to mostly rely on Aubameyang and Lacazette to get them goals but to be able to make a challenge for the title, you have to also add a goal scoring winger to the squad.

Henrikh Mkhitaryan and Alex Iwobi are Arsenal’s main wingers this season and they are both inconsistent because they have only managed to score nine goals and make eight assists in the Premier League.

So how’s Nicolas Pepe’s performance in the French Ligue one?

Nicolas Pepe has been very impressive in the French Ligue one this season because he is banged in 19 goals while making 11 assists. I know most people say that the French Ligue is a very weak league but this doesn’t take a way the fact that a player is talented. For example, Mbappe would walk into any team in the Premier League team because he is a quality striker despite playing in this supposedly weak league.

Nicolas Pepe has a lot of qualities which would help him excel in the Premier League, he is decisive, great dribbler and very strong enough to withstand the physicality of the English Premier League. Nicolas Pepe is valued around £50 to £75million and the gunners might at least make a bid for him in the summer if they get qualification to next season’s UEFA Champions League. The main point is that Nicolas Pepe is better than every winger that Arsenal currently has and would improve the gunners since Emery would now play his preferred 4-2-3-1 formation.