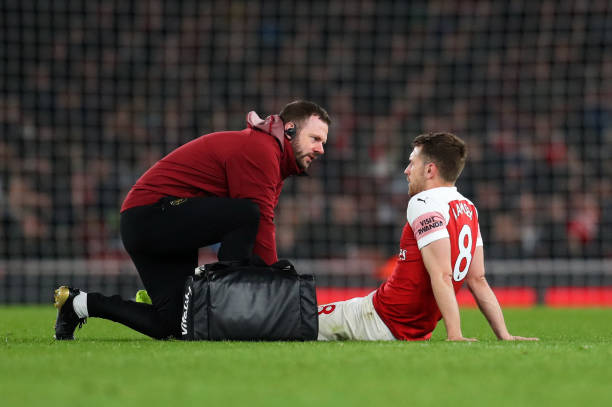 Arsenal will now focus on its upcoming Premier League match against Everton after collecting all the three points from Newcastle United last night thanks to an incredible performance from the squad. Unai Emery was however yesterday without Laurent Koscielny and Granit Xhaka because they were injured.

Granit Xhaka missed the match because he had a groin injury which he picked up while on international duty for Switzerland while Laurent Koscielny who was to start had a bruised left foot. It’s obvious that Unai Emery did not miss these two so much because Newcastle United were toothless last night and Arsenal dominated in the full 90 minutes.

Aaron Ramsey was in the starting eleven of Arsenal that beat Newcastle United 2-0 but he was however withdrawn from the match before it ended. The Arsenal fans were worried about the length of this injury but Emery has given a positive update about the Wales international.

Arsenal’s head coach Unai Emery faced the media to give his post-match thoughts about the match and he was asked about Xhaka, Koscielny and Ramsey’s injuries.

“Ramsey came off but it’s only cramp. I don’t think it’s more and I hope he will be ready for Sunday at Everton. We started Friday with not good news with Xhaka, because he has a small injury and he could not play today.” Unai Emery told Arsenal’s official website.

“Koscielny was coming with us in the group, but with some pain, and he said to us he is not ready to play the match. But then, we had a good response from other players because we have players with good work who decided to play for us.”

Video: Bellerin shows his recovery progress to the Arsenal fans