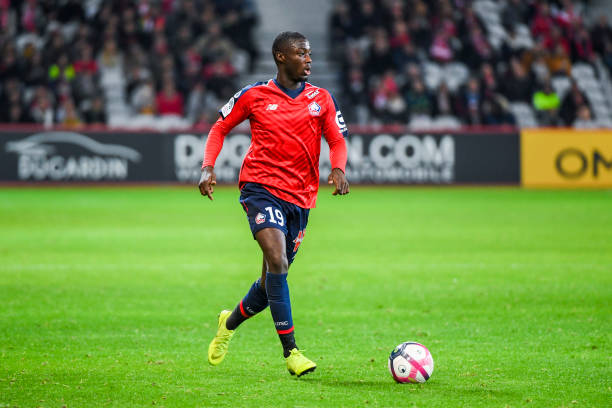 Arsenal have for months been monitoring Nicolas Pepe’s situation at Lille but since the French club has already confirmed that it has failed to convince him to stay, the big question is what will he choose to go to?

It was reported last week by various media houses in England that Arsenal had made contact with Lille about Nicolas Pepe but those reports also confirmed that the North Londoners fear that the Ivorian international could be expensive for them since they don’t usually enter bidding wars with other top clubs. Arsenal has now received a boost in its pursuit of Nicolas Pepe as a report by Sport Bild via Get German Football News claims that Bayern Munich who were also interested in the winger have pulled out of the race to get his signature.

This is massive news to Arsenal because it’s obvious how it can’t financially compete with Bayern Munich and this will now leave Arsenal with a few competitors like Liverpool but it’s worth to note that the Reds haven’t made up their mind on if to still make a move for Nicolas Pepe when they already have Mane, Salah and Firmino. Arsenal needs a winger like Pepe because they have been over reluctant on Aubameyang and Lacazette because their wingers – Mkhitaryan and Iwobi aren’t able to even score a total number of 10 goals in the Premier League this season.

Nicolas Pepe has been outstanding for Lille this season, scoring 20 goals and as well as getting 11 assists when he is just a winger. He has an immerse workrate and that is one of the main things that Unai Emery wants his players to have. The transfer window will be opening soon and so we will have to wait and see if Arsenal will use this opportunity to sign Nicolas Pepe.

Transfer News: The latest on Lacazette to Atletico Madrid rumours