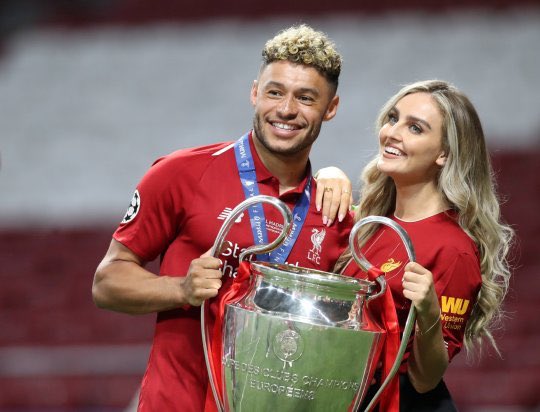 ( Chamberlain with the UCL trophy )

Alex Oxlade Chamberlain was a favourite at Arsenal a few years ago but he however got hated by the fans after he forced a move away from the Emirates Stadium. The gooners might however remove him from the list of players that betrayed them after the comments that he made last night.

Alex Oxlade Chamberlain has been affected by injuries this season but he was however in the Liverpool matchday squad that defeated Arsenal’s arch rivals Tottenham Hotspur in the UEFA Champions League final. The former Arsenal midfielder then went on to send a sweet message to the Arsenal fans saying that he is happy that Liverpool have won the Champions League by beating Tottenham Hotspur.

“I know what that meant to the Arsenal fans out there. [The win] was massive for us at Liverpool but ‘Once a Gooner always a Gooner’ that’s what they say.” said Chamberlain via DAZN.

“I had a personal sort of feeling in that game that we needed to get it done for all the people I left at Arsenal.”

The Arsenal supporters will certainly be happy that he said that ‘Once a Gooner, always a Gooner’ because those are the words which the gooners usually say to the players that they hold dear. Alex Oxlade Chamberlain has now gone into the good books of gooners unlike Olivier Giroud who mocked the gunners in a video which showed him saying; “Thank you Arsenal” in the Chelsea team bus.

It would have been a miserable week for Arsenal fans if their rivals Tottenham Hotspur won the Champions League when the gunners have lost in the UEFA Europa League a few days back.