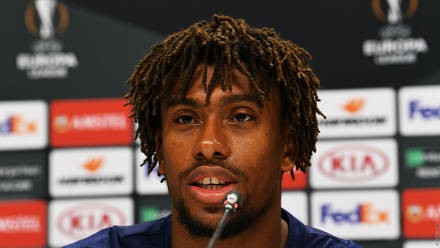 The Premier League transfer window will close tomorrow at 5:00PM and most clubs are trying to bring in new players as quickly as possible and there has been an interesting report in the last few hours which claims that Everton have had a £30million bid for Alex Iwobi rejected by Arsenal.

Alex Iwobi broke into the Arsenal first team a few years back but he has however failed to impress most of the fans because of his inconsistency and the departures of Alexis Sanchez and Alex Oxlade Chamberlain saw him get a lot of minutes last season since he was the only real winger at Emery’s disposal but he only managed to score just 3 goals and make 6 assists despite playing 35 Premier League matches.

As confirmed by reliable journalist David Ornstein, the gunners have rejected Everton’s 30million bid for Alex Iwobi but he however also claims that the gunners are expecting a new bid since the Toffees are looking to also strengthen their squad before the transfer window closes tomorrow. Alex Iwobi is a talented winger but it looks like he could help Arsenal to secure the signature of Dayot Upamecano from RB Leipzig.

LEIPZIG, GERMANY – JANUARY 19: Dayot Upamecano of RB Leipzig controls the ball during the Bundesliga match between RB Leipzig and Borussia Dortmund at Red Bull Arena on January 19, 2019 in Leipzig, Germany. (Photo by TF-Images/TF-Images via Getty Images)

Dayot Upamecano is valued at £70million and the gunners have already had a €60million bid rejected by his club according to reports from Germany, so Alex Iwobi’s sale could be able to fund this transfer even though most reports are saying its complicated. Arsenal won’t be hugely affected by the departure of Alex Iwobi because they already have great youngsters that can play as wingers so his departure would see the likes of Bukayo Saka, Gabriel Martinelli and Reiss Nelson to get more chances.

BREAKING: Kieran Tierney reportedly on the verge of joining Arsenal