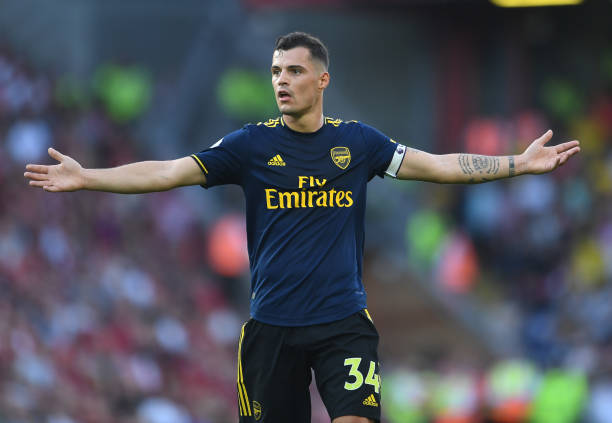 Arsenal faced Liverpool yesterday and lost against them once again at the Anfield Stadium but fortunately this time for Unai Emery’s men, it wasn’t a massacre as the match only ended 3-1 which is better than their 5-1 loss to them last season. Granit Xhaka who captained the gunners has reflected on why Arsenal has always struggled against Liverpool.

Arsenal have been very poor in their matches against Liverpool especially in the matches that are played at Anfield, the gunners made a 1-1 draw with Liverpool at the Emirates Stadium last season and then went on to lose 5-1 against them away from home. The North Londoners also lost 4-0 at Anfield Stadium in Arsene Wenger’s last season as the gunners boss so it’s pretty clear how Arsenal have struggled against Liverpool in the last few years.

Granit Xhaka was in the starting eleven that faced Liverpool yesterday and he claims that they always struggle against The Reds because they are a great team that is always outstanding in its home Premier League matches.

“They have a good team, a great team of great players and it’s always difficult here. It’s not only for us, a lot of teams find it difficult when they come here.” Granit Xhaka told Arsenal Player.

“It’s one game and we’ve lost today but we have to be positive for the next few weeks.”

Arsenal will next week play Tottenham Hotspur and this will be the perfect opportunity for the gunners to make the fans to forget about this loss and win in the first North London Derby.