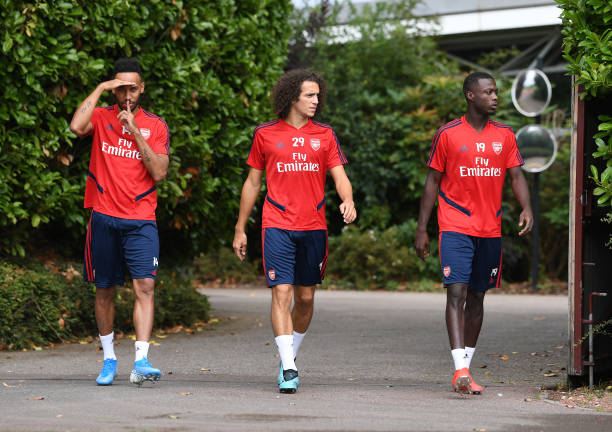 Arsenal will today face Liverpool at the Anfield Stadium and since the gunners lost 5-1 there last season, Unai Emery will try to be careful with the lineup and formation that he selects today. So let’s take a look at Arsenal’s predicted lineup to face Liverpool with all eyes on Aubameyang and Nicolas Pepe.

Bernd Leno has become Arsenal’s first choice goalkeeper after the departure of Petr Cech, so he will definitely be in between the goal posts at Anfield this evening.

Arsenal head coach Unai Emery will probably not change the backline that played against Burnley so Luiz and Sokratis will be partnered together and Ainsley Maitland-Niles and Nacho Monreal will play as fullbacks.

Unai Emery said in his pre-match press conference that Granit Xhaka isn’t fully fit and claimed that a decision would be made on Friday so the Swiss international could start on the bench. Willock will get replaced by Torreira since his physical presence will come in handy and Matteo Guendouzi will play in Xhaka’s role.

Aubameyang and Pepe could start on the wings today with Dani Ceballos playing as a central attacking midfielder. Mesut Ozil can’t start in the no. 10 position because he just restarted training and Reiss Nelson also didn’t impress against Burnley so he won’t get in the starting eleven.

Lacazette will start as the main striker since Aubameyang will be used as a winger.

Bellerin tells Arsenal fans on what to expect from Dani Ceballos