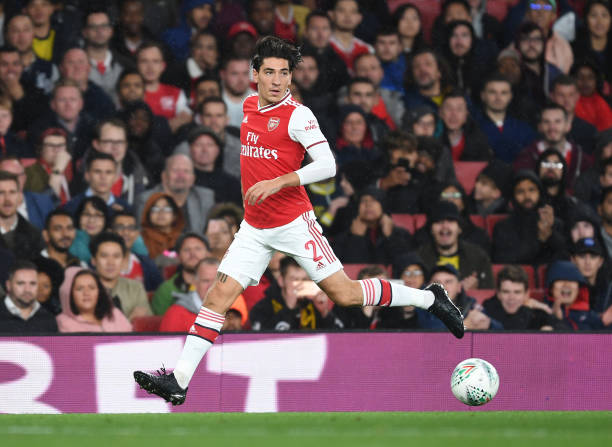 Arsenal will on Monday make a trip to the Old Trafford to face Manchester United and the gooners would be happy if Hector Bellerin was in the squad that took part in that game since he returned to the pitch for the first time last night as the gunners beat Nottingham Forest 5-0.

Hector Bellerin got injured at the start of the year and the gunners have missed him so much because they had to play Stephan Lichtsteiner in that position even though the Premier League was too fast paced for him and are currently playing Ainsley Maitland-Niles there even though he is not a natural right back.

Hector Bellerin was on the bench in the first half as the gunners faced Nottingham Forest but he however came in the last minutes and immediately set up Willock who scored Arsenal’s third goal of the day. It was a perfect return for the Spanish international and the supporters were curious to know if he would be ready for the match against Manchester United but Unai Emery has however confirmed that the trip to Old Trafford might be a bit too soon for him. The Arsenal coach hint that Bellerin might first play for the U-23 atleast one more time.

“He wanted to play 90 and yesterday he told me he’s ready and wanted to play, but we decided to give him less minutes than 90.” Unai Emery told Arsenal Player.

“He played with the under-23s on Friday and also they are the first matches for him. We need to do it progressively and the doctor said to us that we are going to do it like that.”

“I think no [he can’t play 90 minutes against Manchester United next]. Maybe in his mind yes, but we need to listen to the doctor and the doctor wants to do it progressively.”

“Really tonight is the first day and the first minutes, and we are going to maybe share some minutes with the under-23s.”