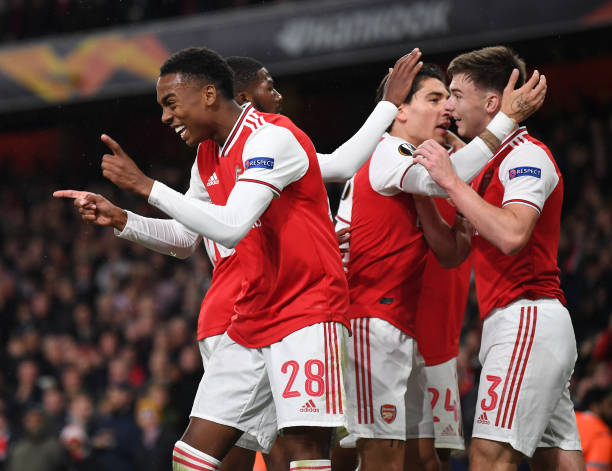 Arsenal made it back to back wins in the UEFA Europa League last night when they beat Standard Liege 4-0 at the Emirates Stadium. It was a great learning experience for some Arsenal youngsters who are trying to break into Unai Emery’s first starting eleven and they showed in this match how they got all what it takes to become top players. So here are a few talking points about last night’s performance.

Arsenal’s back four was impressive last night as it dealt with the minimal danger that Standard Liege caused and they were very good in starting attacks as seen in the move that earned the gunners their first goal as Shkodran Mustafi sent a fantastic long pass to Kieran Tierney who then sent in a fantastic cross that Martinelli headed into the back of the net.

Reiss Nelson combined well with Kieran Tierney on the left flank as they caused a lot of havoc on that side with their fantastic combination play, and they were involved in Arsenal’s second goal as Reiss Nelson passed to Gabriel Martinelli who scored his second of the day with a nice finish. A few minutes later, the gunners got the third of the day through Joe Willock who got the ball in the penalty box after Reiss Nelson’s shot was blocked and the midfielder put the ball into the back of the net.

Arsenal was not good on the right flank because Ainsley Maitland-Niles liked drifting into the midfield and Bellerin was not fast enough and was sometimes afraid to go into 50/50 challenges because he just came back from a long-term injury. The first half ended 3-0 in favour of Arsenal despite Standard Liege getting a few chances in some moments during the first 45 minutes.

Standard Liege tried to put on a fight in the first minutes of the second half but Arsenal regained control of the match and started flooding the penalty box of the visitors and they finally got their fourth of the day through Dani Ceballos. Pepe, Guendouzi and Aubameyang were later brought on and they also had some goal scoring chances. Unai Emery will now have some hard decisions to make at the weekend as many youngsters impressed.