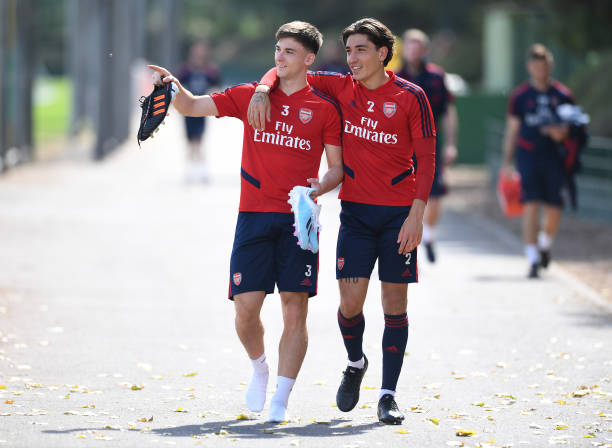 Arsenal was on Monday night welcomed at the London Stadium by West Ham United but the gunners were however struck with an injury before the match had even begun as Hector Bellerin got a hamstring injury and was then replaced by Ainsley Maitland-Niles in the starting eleven.

Kieran Tierney was also in the starting eleven but he however got a shoulder injury during the game and was also then replaced by Sead Kolasinac who wasn’t expecting to participate in that game as he was almost not in the 18 man squad. Arsenal defeated West Ham United 3-1 with the two that replaced Tierney and Bellerin impressing, Freddie Ljungberg provided an update on the injuries of his two fullbacks after the game.

Kieran Tierney joined Arsenal in the summer transfer window with an injury but the gunners have been monitoring him closely and Freddie was obviously devastated to see him go out and claimed that the Scottish left back went to the hospital to check what was wrong with his shoulder.

“Tierney, I think it’s something with his shoulder but I don’t know exactly what it is. But obviously we had to take him off so I think he’s going to maybe go to hospital and check what it is.” Ljungberg told Arsenal’s official website.

Hector Bellerin has just recovered from an ACL injury and it’s understandable that he will be having these sorts of small come backs as seen yesterday since he spent almost a full year on the sidelines. Ljungberg says that the Spaniard had a hamstring injury in the preparations for the game hence replacing him with Maitland-Niles.

“Hector had a bit of feeling, I think, in his hamstring in the warm up. Then we took the decision. I said I’m not going to force anyone to play if you don’t feel 100 per cent.” said Freddie.

Mikel Arteta speaks out on the injuries of Kolasinac and Torreira