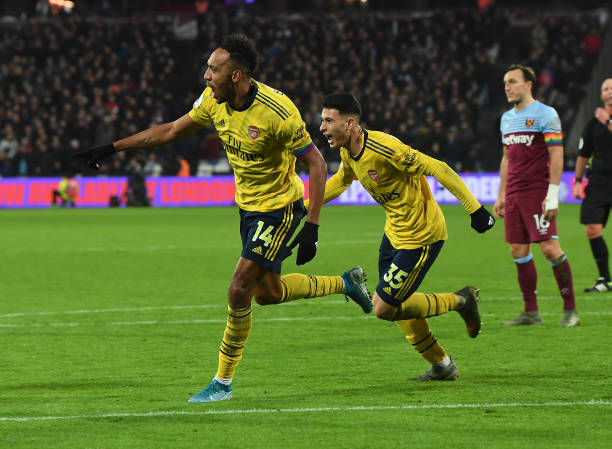 ( Aubameyang and Martineli / Photo via Getty )

The Premier League is back and Arsenal’s game against Everton will be the first match of the weekend. The gunners come into this match with a great number of their first team players still on the sidelines but they will however have no excuses of failing beat Everton since they too have an injury crisis.

This will be Freddie Ljungberg’s last match as Arsenal’s interim head coach and so we take a look at the expected lineup with all eyes on Aubameyang and Gabriel Martinelli.

Bernd Leno is the first choice goalkeeper and he has been fantastic this season so he will definitely be in the starting eleven.

Sokratis Papastathopoulos is suspended for this game and Rob Holding is still a doubt so Shkodran Mustafi could make a return to the Premier League starting eleven. Arsenal’s back three will consist of Luiz, Mustafi and Chambers.

Sead Kolasinac has been ruled out until January and Kieran Tierney will be returning in March so Freddie will be forced to play Bukayo Saka in this position. Since Saka and Maitland-Niles aren’t fullbacks, the gunners might use a back three with these two as wingbacks.

Granit Xhaka is back into the squad and will definitely be in the starting eleven alongside Lucas Torreira since Freddie is not a big fan of Matteo Guendouzi. Mesut Ozil is a doubt for this game.

Aubameyang, Pepe and Martinelli have been impressive in the last few games and so they will be in the starting eleven that faces Everton this afternoon.

Arteta speaks out on Mesut Ozil’s situation at Arsenal