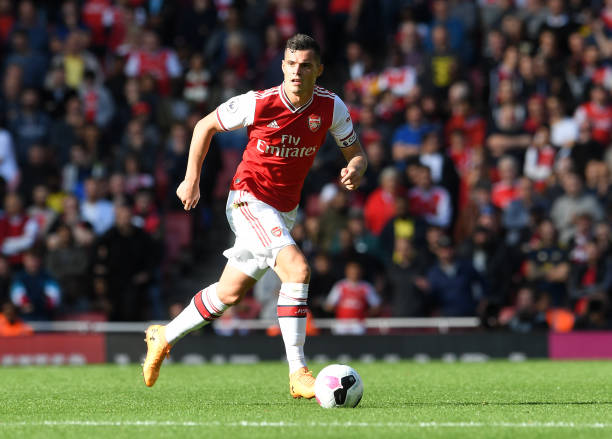 Arsenal midfielder Granit Xhaka has in the last few weeks been heavily linked with a move to Bundesliga side Hertha Berlin who are currently trying to build a squad that will challenge in the upcoming seasons. Granit Xhaka has been at Arsenal for four years now but he has failed to become a fan favourite at the club and it looks like he might still leave this January despite reassuring comments from Arteta about his future.

Granit Xhaka clashed with the Arsenal fans in their 2-2 draw with Crystal Palace a few months ago and everyone thought that this incident would be enough to make him one of the first transfers to be done in January but Mikel Arteta has however continually said that he hopes that he stays in North London. German news outlet BZ has released a report claiming that Hertha Berlin are still interested in Granit Xhaka and that the gunners have set an asking price of €30million.

It’s been very clear that Arsenal head coach Mikel Arteta doesn’t want to sell Granit Xhaka in the January transfer window because the Swiss international is very vital to the way that he wants his team to play, and he also doesn’t seem to be a big fan of Matteo Guendouzi. The report also claims that Granit Xhaka’s departure will depend on Arsenal finding the right replacement for the central midfielder, and that the gunners are currently in pursuit of Juventus’ Adrien Rabiot.

Mikel Arteta’s latest comments on the Granit Xhaka transfer rumours was that the Switzerland captain had told him that he will be staying at the club but this report is however claiming that Hertha Berlin are still interested and that a move could still happen. Should Granit Xhaka leave Arsenal in January, the gunners have been linked with a loan move of Adrien Rabiot who has got limited game time in Italy this season.

Report: Four Arsenal players that will leave Arsenal in the January transfer window