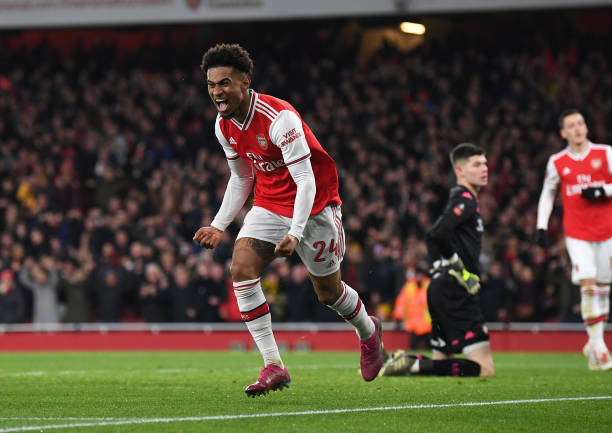 Reiss Nelson has been a regular starter for the gunners in the last few weeks as it looks like Mikel Arteta is a huge fan of the young English winger who is highly rated. Reiss Nelson finally repaid the trust that Mikel Arteta has shown in him by scoring the only goal of Arsenal’s win over Leeds United in the FA Cup third round.

Reiss Nelson has been in and out of the Arsenal squad this season but he however started in the matches against Bournemouth and Chelsea which shows how Mikel Arteta has a lot of faith in him and the English winger scored his first Emirates FA Cup goal last night.

Mikel Arteta removed Reiss Nelson first in the game against Leeds United which is an indication that he was being rested for the match against Crystal Palace at the weekend. Arteta was full of praise for Reiss Nelson in his post-match press conference and claimed that he believes that the 20-year-old has a lot of potential.

“I’m very pleased with how he’s training, how he’s reacting, how willing he is to learn – he’s asking the right questions. I know about his ability, I knew him since I was here and coached him a little bit when he was 16.” Arteta told Football.London.

“I know his potential and now he needs to put things away. I think he needed that goal for his confidence, he needs to improve his end product a little in the final third but he’s doing all the right things.”

Pierre-Emerick Aubameyang has only 18 months remaining on his current contract at Arsenal and there are already reports linking him to a number of European clubs like Barcelona, Inter Milan and Real Madrid. The Arsenal fans are hoping to see him put pen to paper to a new deal but that looks unlikely for now but he however said in the captain’s notes that he would be staying at the North London club and Arteta also said that he wouldn’t want to lose him.

“His commitment since the day I walked through the door has been phenomenal, the work he’s put in, his attitude around the place with the players – so I hope we can do that (keep him).” said Arteta.