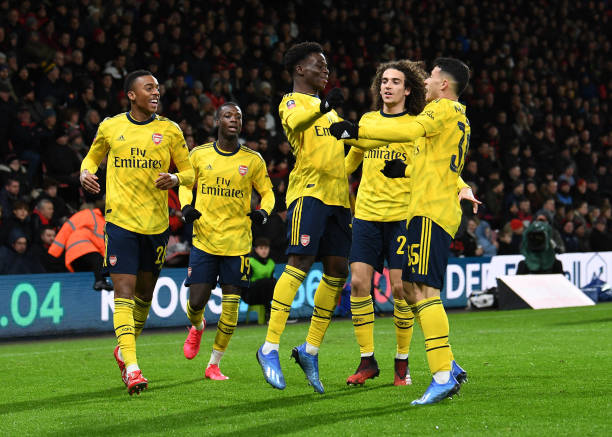 Arsenal are back to winning ways after an impressive 2-1 win over Bournemouth in the fourth round of the FA Cup. The gunners are through to the next stage thanks to goals from Bukayo Saka and Eddie Nketiah and will be facing Portsmouth in March. So let’s a look at a few things we noticed in the game.

The gunners looked composed and worked hard in winning back the ball quickly hence this helping them to have most of the possession in the first few minutes. It didn’t take long for Arteta’s side to go ahead as Martinelli combined well with Bukayo Saka before the 18-year-old Englishman fired in a wonderful shot to score his first FA Cup goal.

The early goal helped Arsenal to calm down and play with more confidence, and started creating more chances since Bournemouth had decided to surrender possession to them. Joe Willock who was hugely involved in the first goal sent a great pass to Saka on the flanks and the left back crossed the ball towards rushing Nketiah and the striker put the ball into the back of the net to make it 2 nil for the North Londoners in the 26th minute.

Matteo Guendouzi looked very brave today and helped in stopping many possible attacks of the Cherries which is a big improvement on the performances that he has put on in the last few weeks. Granit Xhaka was once again solid in the midfield but he however did give the home side numerous chances with some lousy passes but the gunners were luckily not punished. The first half ended 0-2 in favour of Arsenal.

Shkodran Mustafi who was doing well against Bournemouth but he however went down in the 60th minute after a collision with Emiliano Martinez and he was then replaced by Rob Holding. The gunners latter brought on Dani Ceballos in the place of Nicolas Pepe who surprisingly seemed poor tonight.

Bournemouth got a glimmer of hope at the end after Sam Surridge’s shot went into the back of the net in the 94th minute but Arsenal was however able to hold onto their lead and secured qualification to the next round. Mikel Arteta will be hoping that the gunners can build from there as they are still unbeaten in 2020.