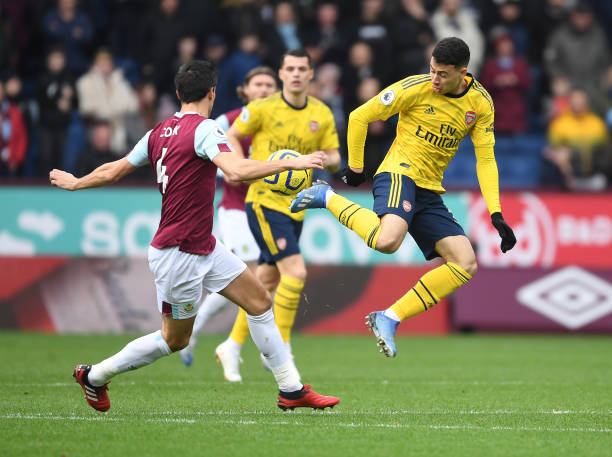 ( Burnley Vs Arsenal / Photo via Getty )

Arsenal have once again dropped points after making a 0-0 draw with Burnley at Turf Moor and this means that they have now made 13 draws in the Premier League in this 2019/20 campaign. Mikel Arteta’s side were fortunate to get a point against Burnley who seemed determined to end their poor form against the North Londoners. So here are a few things we noticed from the game.

Arsenal dominated in the first minutes of the game and Mesut Ozil was left in acres of space on two occasions and in one of those situations, Aubameyang managed to send a beautiful cross in the penalty box but Lacazette’s header went wide. The gunners later got another chance to get on the score sheet after David Luiz sent a great long ball to Aubameyang but his shot failed to find the target.

Since Mikel Arteta decided to use Gabriel Martinelli on the right-wing, the Brazilian international failed to have an impact on the game as he was mostly failing to beat his man on many occasions due to not being used on his favourite left flank. Aubameyang got another chance at a goal after a great pass from Xhaka but he failed to lob the ball above the goalkeeper. After a number of chances missed by Arsenal, Burnley grew back into the game and started creating chances mostly through set pieces as you’d expect but it remained 0-0 in the first 45 minutes.

Lucas Torreira replaced Bukayo Saka at the start of the second half because the 18-year-old wasn’t able to continue due to an injury and this saw Granit Xhaka played as a left back for the rest of the match.

BURNLEY, ENGLAND – FEBRUARY 02: Lucas Torreira of Arsenal is challenged by Ashley Westwood of Burnley during the Premier League match between Burnley FC and Arsenal FC at Turf Moor on February 02, 2020 in Burnley, United Kingdom. (Photo by David Price/Arsenal FC via Getty Images)

Arsenal let Burnley have more possession in the second half and the home side started attacking the gunners each and every time but Arteta’s side remained firm on making the score line stay at 0-0. Burnley’s James Tarkowski header in the 56th minute missed the top corner after a great cross from Westwood following a set piece situation. The gunners continued conceding corners and free kicks and resorted to counter attacks which failed to produce.

Joe Willock and Eddie Nketiah were brought into the game in the second half but they both failed to make an impact, Arsenal’s best chance in the second half was Aubameyang’s header which failed to find the target. Burnley got the best chance of the match when Jay Rodriguez hit the bar from close range and goal line technology revealed that the ball did not cross the line. So it’s another draw for Mikel Arteta and now he will be hoping to start performing better after the break with his new signings.