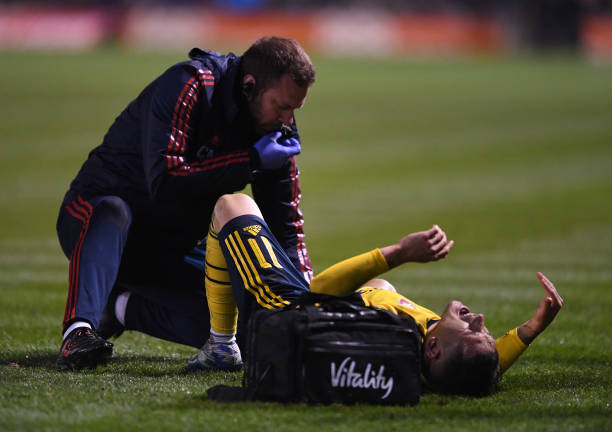 ( Torreira gets injured / Photo via Getty )

Arsenal will on Wednesday make a trip to Manchester to face the current Champions and the club has today released the latest team news with injury updates about a number of players like Lucas Torreira, Cedric Soares and Shkodran Mustafi.

Lucas Torreira got injured in Arsenal’s 2-0 win over Portsmouth a few days ago and it looks like his season could be done as the club has just confirmed that he will likely be out for 8 to 10 weeks due to a fracture to his right ankle. The gunners will surely miss him because he is always helpful in the physical games and that’s one less option for Arsenal head coach Mikel Arteta.

Shkodran Mustafi hasn’t played for Arsenal since their UEFA Europa League defeat to Olympiacos but he could however make his return as the club says that he is being assessed to see if he will be available to play in Wednesday’s game against Manchester City. The German centre back has in the last few weeks been impressive and so it will be interesting to see if Arteta will start him if he’s fit to play.

Arsenal completed the signing of Cedric Soares on a loan deal in the January transfer window but he is however yet to play for the gunners this season as he arrived with an injury, it’s been confirmed that the Portuguese right back will be hoping to return to full training today and this could potentially rule him out of playing against The Citizens.

Arsenal has also confirmed that Sead Kolasinac will be aiming to return to full training by the end of March while Calum Chambers will be undergoing rehabilitation for six to nine months.