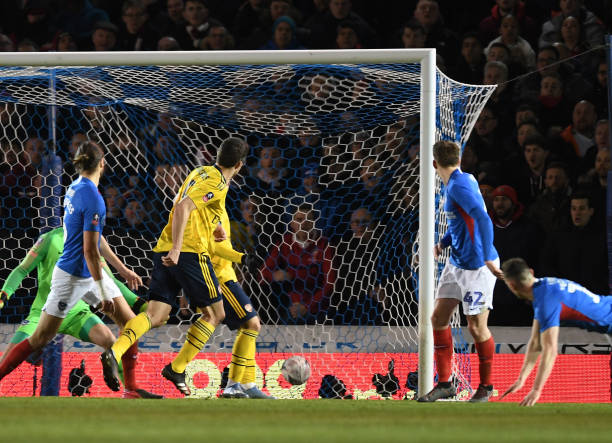 Arsenal have progressed to the FA Cup quarter finals after beating League One side Portsmouth at its home ground thanks to goals from Sokratis Papastathopoulos and Eddie Nketiah. The gunners will now have to await for the FA Cup draw to get to know their next opponents in the competition but they’ve however tonight got the job done against Pompey. So here are a few talking points about the game.

Arsenal were a bit poor in the first minutes of the game and were giving the home side some low quality chances but they however looked to have got a bit control until Lucas Torreira went down in immense pain after a huge challenge by a Portsmouth player. Ceballos replaced injured Lucas Torreira.

Arsenal’s front three struggled in the first 35 minutes as the home side was very good at pressing and winning back the ball but they however were also poor in the final third as they wasted most of their crosses and corners. Arsenal’s new signing Pablo Mari and David Luiz were very impressive and made sure that the home side don’t get on the score sheet before the halftime whistle.

Arsenal found the breakthrough in the 4th minute of the added five minutes after Reiss Nelson sent a cross into the penalty box of Portsmouth and Sokratis was able to put the ball into the back of the net to give the North Londoners the lead. The first half ended 0-1 in favour of the gunners. It took just six minutes after the second half for the gunners to get their second of the day after Nelson’s cross found Nketiah who put the ball in the back of the net in the tiniest of angles.

The gunners took full control of the game after the second goal went in, Portsmouth didn’t have the same tempo as they had in the first half and it’s probably because they were shattered since they worked hard in the first half. The home side didn’t have any notable chances apart from a shot that went straight to Emiliano Martinez’s hands.

Mikel Arteta will surely be happy with the performance from his team because his team played professionally without fear after they got their second goal in the 51st minute. He will now focus on the upcoming Premier League game against West Ham United.