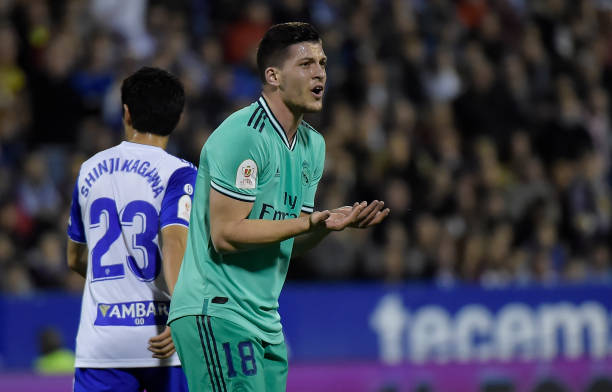 Real Madrid completed the signing of Luka Jovic in the 2019 summer transfer window for a fee believed to be £55million from Eintracht Frankfurt but he has however struggled this season in the Spanish LA Liga. Arsenal head coach Mikel Arteta is reportedly interested in Jovic but the North Londoners can only be able to sign him on one condition.

Luka Jovic was very impressive in the 2018/19 season as he scored 27 goals for Eintracht Frankfurt and was one of the players that helped the German club to reach the UEFA Europa League semi finals but he has however struggled in the Spanish LA Liga as he has only so far scored 2 goals during his time at Real Madrid. Jovic was meant to be the player that replaces Karim Benzema but the veteran French striker has been better this season as he is the top scorer of the Spanish giants this season.

An exclusive report by The Daily Star claims that Arsenal head coach Mikel Arteta wants Luka Jovic at the Emirates Stadium as he wants a traditional centre forward that can be used as a target man but it however also states that the North Londoners will be hoping that Real Madrid accept to loan the Serbian international in the upcoming summer transfer window.

There are transfer rumours that Real Madrid might be on the look out for a new striker in the next transfer window and they have even been linked with a move for Arsenal captain Pierre-Emerick Aubameyang and so the chances of Luka Jovic being available on loan in the summer can’t be ruled out. Aubameyang leaving Arsenal in the summer could accelerate Arsenal’s pursuit of Luka Jovic since he could play as a target man in Arteta’s system.

Report: Why Hector Bellerin could accept to join Inter Milan in the summer