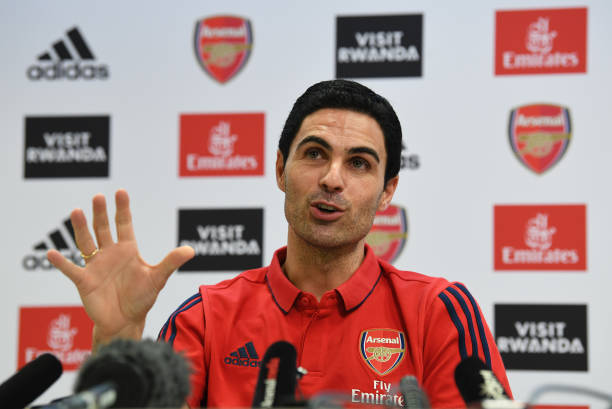 The Premier League has been suspended since March but Arsenal’s team was allowed back to their training ground which shows that the league will soon be opening. It’s been four months since Mikel Arteta got appointed as the new boss of Arsenal but his progress was however halted by the spread of the COVID-19 virus.

Arsenal fans will be looking forward to the return of the Premier League and we sum up some decisions that we believe that they’ll be hoping that Mikel Arteta does at the restart of the 2019/20 campaign. So here are two decisions that the gooners will want Arteta to do when the season begins.

1. AUBAMEYANG IN THE CENTRE FORWARD ROLE

Pierre-Emerick Aubameyang is yet to play as the centre forward since Mikel Arteta got appointed as the new boss and the Arsenal fans have for a while been asking questions as to why he has persisted in doing so when the Gabon international has always been better as a striker than as a winger. Arteta did however say that the current injuries in the squad were the reasons why Aubameyang had to keep playing on the left flank but Tierney and Kolasinac will be back when the league returns and so there won’t be any more excuses.

Aubameyang has kept scoring even while on the flank but he has struggled in some games due to playing there and so the fans will be hoping that their captain gets played in his rightful position when the league resumes.

Bukayo Saka has played as a left back in most games under Mikel Arteta this season due to the injuries of Kieran Tierney and Sead Kolasinac but the two left backs will all be fully fit when the Premier League returns but it would however be unfair to drop the youngster when he was on form before the league got suspended.

Bukayo Saka has mostly been playing as a wingback in Arteta’s system but the fans will be hoping that he gets put in his rightful left wing position so that Aubameyang could go into the centre forward position. It will be interesting to see if Arteta keeps playing Saka as a fullback when the real fullbacks are fully fit but he did hint at doing this when he said that Kieran Tierney shouldn’t expect to just be given his spot in the starting eleven, he said that the Scottish man would have to fight with the 18-year-old to get back his spot.

Report: Reasons why Aubameyang might snub Inter Milan & Barcelona to stay at Arsenal