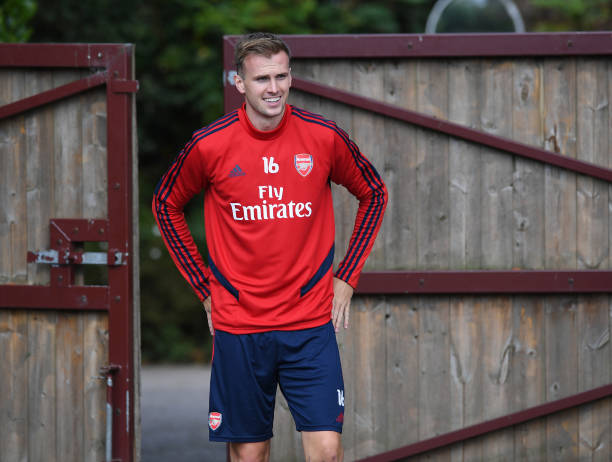 Arsenal have not played a Premier League match in a month now and their players were the first to go into self isolation after it was confirmed that gunners head coach Mikel Arteta had tested positive of COVID-19. Arsenal defender Rob Holding recently answered questions from the fans and has talked about the player that he has been FaceTiming with the most.

The Premier League is currently cancelled and there isn’t any specified date for its return and all players from every club are all stuck at home as they wait until is is safe to start training and continuing the season. Arsenal centre back Rob Holding recently had a question and answer session set up so that he can answer some questions of the supporters and one asked him who he has been video calling ( via FaceTime ) the most during the lock down.

Rob Holding (left) and Calum Chambers in the crowd during the NBA London Game 2019 at the O2 Arena, London. (Photo by Simon Cooper/PA Images via Getty Images)

“Probably no surprise to people… it’s been Calum, as well as Hector occasionally because we’ve been doing yoga together with our teacher.” said Holding.

“It’s been good having that bit of contact with those people each day, but yes, I’ve been facetiming Calum and playing Call of Duty and stuff with Calum as well, so I’m always speaking to him really.”

It is probably not gonna be a surprise to most Arsenal fans that Rob Holding would be talking to Calum Chambers the most because they are both English and seem to have a close relationship as they are always together in training and are always talking about each other in the club’s marketing video segments on the social media platforms. It is not clear when the Premier League will finally make its return or when the players will be allowed to start training together and so Holding and Chambers might have to keep FaceTiming with each other for a long time.

Report: How Arteta will ensure that Arsenal players remain fit during the lock down