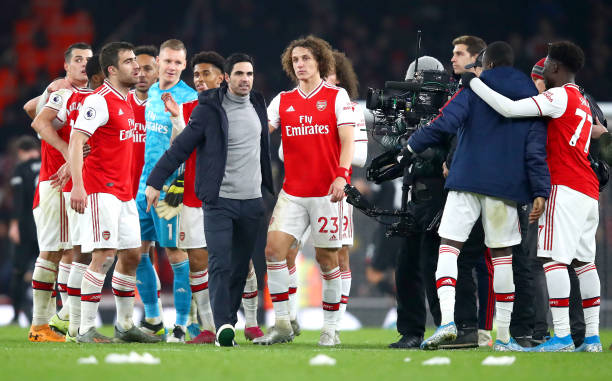 ( Mikel Arteta and his squad / Photo via Getty )

Arsenal appointed Mikel Arteta as their new head coach in December last year and he has had a positive start to life as a boss as the gunners seem to be improving in some aspects under him. There’s however a lot of other things that Mikel Arteta will want his team to improve in and so we take a look at the two important things that he will want his side to have improved on when the Premier League returns.

Arsenal have always been a team that is known for playing possession based football and they seemed to be losing that in the last months of Unai Emery but Mikel Arteta has however promised that the gunners will try to go back to that type of football. Arsenal have kept most of the possession in their recent games but the problem has been that they can’t hold onto the ball for a long period as they usually collapse in the second half and let their opponents to then start dominating them.

Mikel Arteta will obviously want them to atleast improve on the period that they dominate the smaller sides because this helps to minimise the chances that the opponents would have and we did see the dangers of the gunners failing to dominate a game in their last recent game against West Ham United, they won 1-0 but they could have easily lost that game since they failed to control the game more by having less of the ball hence the visitors getting a huge amount of chances but luckily for Arteta’s men, the West Londoners had poor finishing.

Arsenal have improved in creating chances under Mikel Arteta but the problem has now been converting them and their failure to kill off games in the first half have cost them points and even ended their European campaign.

The gunners had some great chances of scoring against Olympiacos in the first half but they however failed to convert them and were then punished by the Greek side hence their European hopes ending abruptly. Their failure to finish off games have seen lose many points and now they will need to win their next Premier League games to have any chances of getting UEFA Champions League football and so Arteta will want them to improve on that.

Report: Reasons why Aubameyang might snub Inter Milan & Barcelona to stay at Arsenal

Report: Incredible stats showing how influential Saka and Martinelli have been for Arsenal