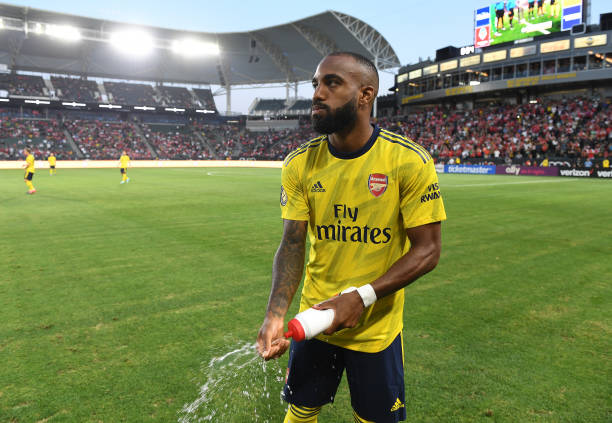 Arsenal will be looking to sell Alexandre Lacazette in the summer transfer window but it is understood that they will not be able to get enough funds from him due to the current financial problems of clubs and so there has been a lot of reports of the gunners making a swap with Atletico Madrid to get Thomas Partey who they eagerly want. New reports from Spain claim that Atletico Madrid want the swap deal to include a different player.

Alexandre Lacazette arrived at Arsenal in the 2017 summer transfer window and he didn’t have a great debut season as he got injured for some time and the club decided to go buy a new striker in the next transfer window. Lacazette had a better season in the 2018/19 campaign as they formed a great partnership with Aubameyang but he has however this season has struggled as he has only got nine goals in all competitions so far.

The Arsenal fans hope that Arsenal proposes a swap deal of Alexandre Lacazette and Thomas Partey but Spanish outlet AS is now claiming that Atletico Madrid are willing to accept a swap deal that would see the French striker join them while the North Londoners welcome Thomas Lemar who has turned out to be a flop for the Madrid club.

(L-R) Alexandre Lacazette of France and Thomas Lemar of France before the soccer friendly match between France and Paraguay at Roazhon Park on June 2, 2017 in Rennes, France. (Photo by Dave Winter/Icon Sport)

The report also claims that Arsenal are ready to let go of Lacazette and that they will be looking to listen to offers, and so that a swap deal involving him and Thomas Lemar would be beneficial for both sides. Lemar was close to joining Arsenal in the past but he however moved to Atletico Madrid where he has failed to impress in the Spanish LA Liga as he hasn’t scored this season despite having been bought for a large sum of money.

This comes as a big blow to the Arsenal fans because they want the two clubs to instead do a swap deal of Lacazette and Partey since they believe that they don’t need another winger who could as well make the club to stop giving minutes to some talented youngsters such as Martinelli and Saka.