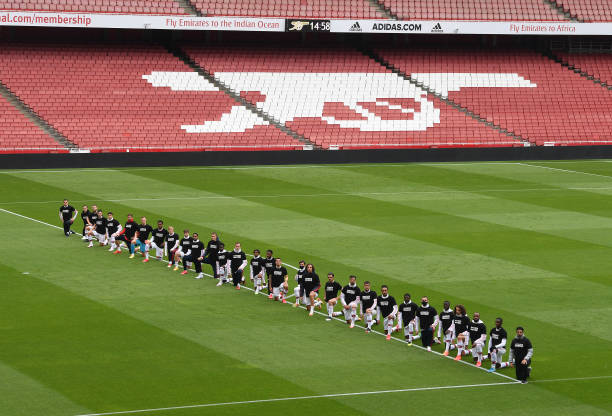 Many entertainment companies around the world have all shown support to the Black Lives Matter (BLM) movement which begun after the death of unarmed black man George Floyd in the United States and Arsenal have become the latest club to speak out on this issue.

Arsenal played a friendly game against Brentford at the Emirates Stadium on Wednesday and all the players, coaches and the staff were wearing T-shirts that were showing support to the Black Lives Matter initiative and Mikel Arteta has come out to reveal the player that made all this possible. Arsenal head coach Mikel Arteta has revealed that it was captain Aubameyang who called him and he then talked to the club which gave the greenlight to wear the T-shirts and take a knee.

“The thing that I like most is that it came from them. I got a phone call from the captain asking to do that, I spoke with the club straight away and we were very clear that we wanted to support their intentions, everyone collaborated, we created the shirt.” Mikel Arteta told Sky Sports.

“It was a really strong message and it is more powerful because it comes from them. They think they have to support these types of causes.”

Mikel Arteta and the rest of the Arsenal squad took a knee in the middle of the pitch and some of the T-shirts read messages like;  “I can’t breathe”, “I’m not black but I stand with you.” and another “My skin is not a crime”. The Premier League has always promoted the “Kick it out” campaign to combat racism and the Arsenal fans have been very happy that Aubameyang urged the club to also show support to this series issue.