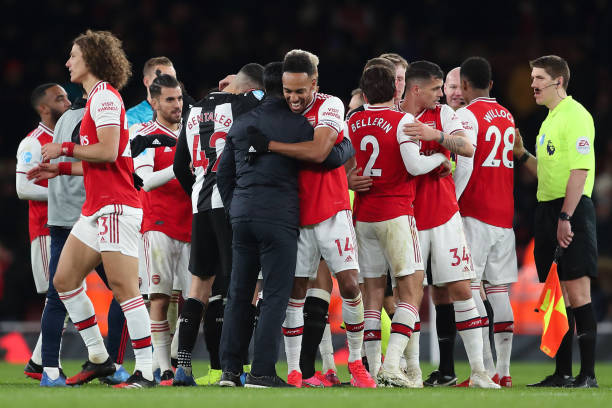 Pierre-Emerick Aubameyang has scored 61 goals as well as making 19 assists since he arrived at Arsenal in the winter transfer window of 2018 but the gunners find themselves in a tough position today as he has entered the final year of his current deal at the Emirates Stadium.

Arsenal appointed Mikel Arteta as their new head coach in December last year and Aubameyang has of course been the top scorer under him as he hasn’t taken long to show the Spaniard that he is an incredible attacker that any manager that would love to have in his team. Aubameyang has been heavily linked with a move away from Arsenal in the last few months and Arsenal’s boss Mikel Arteta has spoken out on the future of the Gabon international.

Pierre-Emerick Aubameyang has been Arsenal’s top scorer in the league this season with 17 goals and Arteta has spoken out on what he believes the gunners must do to keep the 30 year old at the Emirates Stadium. Arteta says that they need to show Aubameyang that the club is going forward and that he will be a key part in this transition into making them a top club once again.

“I think it’s our responsibility to make him feel this is the right next step in his career. In order to do that he needs to feel valued, that he belongs to us and we want him and then he needs to continue to believe that we can take this club forward in the way we want to and that he’s going to be a key player to do that.” Mikel Arteta told Football.London.

“I think at the moment I’m extremely happy with how he has been performing and behaving. I think I’ve got a really good relationship with him where we can discuss face-to-face a lot of things. So far, as I’m aware, I think he’s very happy at the club.”

The Arsenal fans will be happy that Arteta said that Aubameyang is now happy at the club at the moment and they will hope that the 30 year old striker leads them to a UEFA Champions League spot.