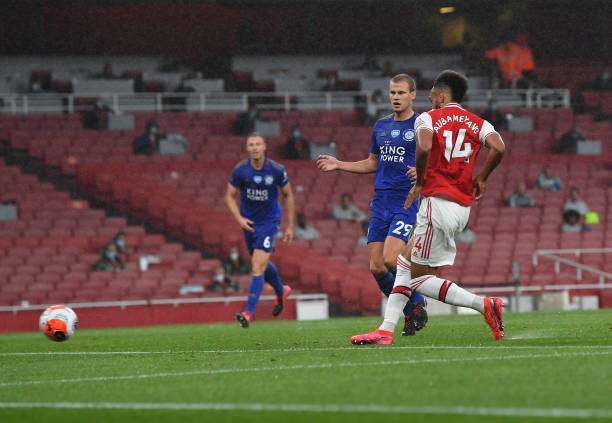 Arsenal were on Tuesday night held to a 1-1 draw with Leicester City at the Emirates Stadium after an Eddie Nketiah red card in the second half saw the visiting team come back into the game to get a point. Arsenal took the lead in the first half through Aubameyang but Vardy as always had something to say about that as he equalised for The Foxes in the second half.

Arsenal came into this game well knowing it was a must win game since they are running out of matches to keep their UEFA Champions League hopes alive and they did show the hunger and determination to win in the first half as they were very quick on loose balls, pressed well and frustrated Leicester City. The gunners finally went ahead in the 21st minute after Ceballos provided a wonderful pass to Saka who then crossed the ball to Aubameyang who put the ball into the back of the net.

Arsenal then went on to have many more chances in the next few minutes with some notable ones like Lacazette’s header which got saved and Bellerin’s thumping shot that got pushed up away by the Leicester City goalkeeper. The Foxes did put the ball into the back of the net but it was however ruled as offside and the first half ended 1-0 in favour of Arsenal.

Leicester City was a much more improved team in the second half since they held on to possession for much longer and kept the gunners in their own half for a long time but Arsenal still looked comfortable since they were well organized and compact at the back. As the match neared it’s closing stages, Arteta made some changes and among those were Eddie Nketiah coming in for Alexandre Lacazette and he four minutes later got sent off due to a rough and reckless challenge.

The gunners now completely lost their attacking play and now fully stayed in their own half but they were however finally opened up in the 85th minute and Vardy put the ball into the back of the net to make it 1-1. Despite Leicester City having more chances, the match ended 1-1 and Arteta will be disappointed that his team was not clinical enough in the first half as they could have finished off the game much earlier.

HIGHLIGHTS FROM THE GAME