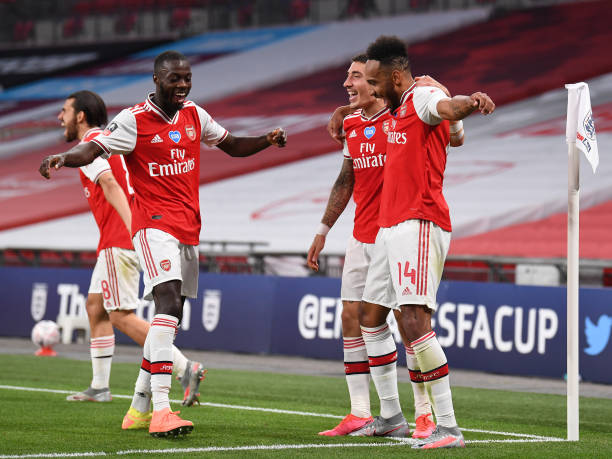 Arsenal are through to the Emirates FA Cup final after an impressive 2-0 win over Manchester City at the Wembley Stadium courtesy of goals from their one and only captain Pierre-Emerick Aubameyang. What a big game this was for Mikel Arteta and his team showed remarkable belief to beat the FA Cup defending Champions and they now have a secondary chance of qualifying for Europe and as a bonus, he showed his managerial brilliance  by tactically beating his former mentor  Pep Guardiola despite having a weaker squad.

Manchester City were pretty dominant in the first minutes of the game but Arsenal made sure that they remained in the game and then started to get chances with their first being a pass from David Luiz finding its way to Aubameyang who immediately fired a direct shot to Ederson who saved it with out too much trouble.

Aubameyang was however not denied the second time as a wonderful move by the Arsenal team saw Nicolas Pepe receive The ball on the flank and he sent a perfect cross into the penalty box and the Gabon international to put the ball into the back of the net to make it 1-0. Manchester City tried to quickly get back into the game but then panicked and started letting Arsenal to control the game, and they did just that as they got other chances but failed to find a second before the halftime whistle.

Manchester City came back in the second half with a bit more desire to look for an equaliser and pinned the gunners in their own half and Mikel Arteta’s men then opted to wait for counter attack opportunities. Despite Manchester City’s immense possession, they failed to create high quality chances and then usual suspect Pierre-Emerick Aubameyang punished them in the 71st minute.

Arsenal started a great counter attack and Nicolas Pepe tried to dribble through on the flank but then decided to passed it back to Kieran Tierney and the Scottish man sent a delightful pass to Aubameyang who then put the ball into the back of the net to make it 2-0 for the North Londoners. What a day this is for Mikel Arteta and his boys as this despite being one of their worst seasons, they are going to play in the FA Cup final at the Wembley Stadium.