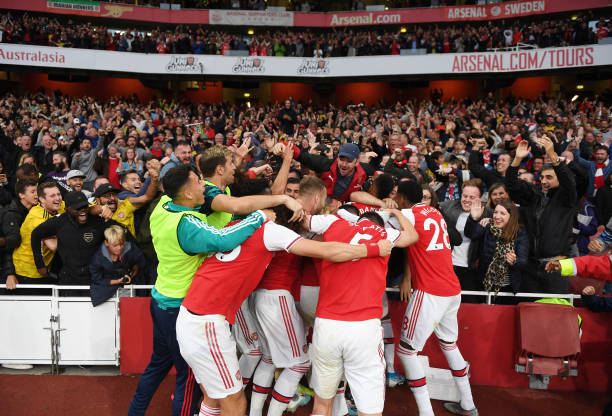 Just a few weeks ago, Arsenal lost to Brighton & Hove Albion in the last minute of the game and everything seemed to be going bad for the North Londoners after the restart but fast forward to now, they have now won their last four matches and have begun believing that they can get UEFA Champions League. Mikel Arteta’s will however need to beat Leicester City on Tuesday to truly show that they need the Champions League spot.

Leicester City ended their winless run at the weekend with a win over Crystal Palace and so they will probably come at the Emirates Stadium with a bit more confidence as their previous games had shown that they were at risk of dropping out of the Premier League top four. The gunners come into this match with so much determination and confidence as Mikel Arteta did say that their game against Wolverhampton was a challenge and that the one against The Foxes will be an even bigger one as a win will see them get 52 points with hope that Manchester United and Chelsea lose their games.

LEICESTER, ENGLAND – NOVEMBER 09: Pierre-Emerick Aubameyang of Arsenal walks out with the mascot before the Premier League match between Leicester City and Arsenal FC at The King Power Stadium on November 09, 2019 in Leicester, United Kingdom. (Photo by David Price/Arsenal FC via Getty Images)

Arsenal head coach Mikel Arteta has obviously been happy with their past four results but he however understands how all this will not mean much if they go and lose their remaining games and so he will hope that a win over Leicester City will give them the necessary belief to get points in the North London Derby and against Liverpool.

Arsenal have suffered a lot of injuries since the Premier League returned but they have however confirmed no new injuries as per the latest team news. And so Chambers, Leno, Martinelli and Mari are still on the sidelines while Mesut Ozil is a doubt for the game against Leicester City.

Leicester City will be without Ricardo Pereira and Daniel Amartey as they are still on the sidelines, and their boss Brendan Rogers confirmed that Ben Chilwell and James Maddison are doubts for the game against The Gunners.