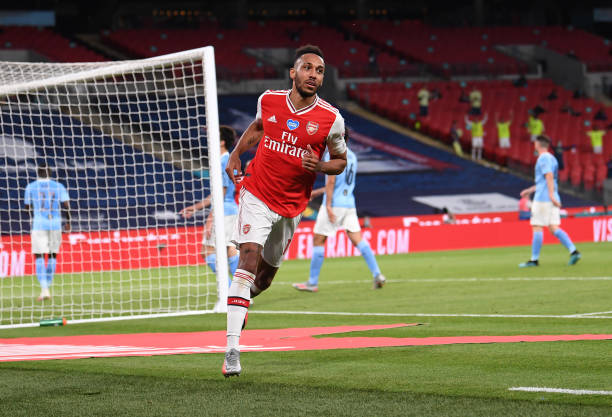 The Emirates FA Cup will be contested by Arsenal and Chelsea this year and the stakes will be higher for the North Londoners as they will not only be winning a cup competition but would also get European football as well as have a big impact on their transfer business. Aubameyang is yet to renew his deal and there are fears that he could extend if Arsenal win the FA Cup and Arteta has commented on those rumours.

Arsenal striker and captain Aubameyang has less than 12 months remaining on his current contract at the Emirates Stadium and the club is yet to give a confirmation on whether he will indeed renew or be sold but what’s for sure is that the club will be forced to sell him this summer transfer window if he shows that he doesn’t want to commit his future to the North London club.

Arsenal head coach Mikel Arteta like all coaches has enjoyed the goals provided by Aubameyang in his first months at the club and he has spoken out on whether winning the FA Cup keeps the Gabon international at the club. Arteta said that he has no fear that Saturday’s game is Aubameyang’s last at Arsenal and also says that winning the FA Cup isn’t the deciding factor on whether the player stays or not.

“No. What I said is it’s a package at the end. You need a lot of ingredients on the table to persuade a player of his level to be at this football club.” Mikel Arteta told Arsenal’s official website.

“Don’t forget that he still has a contract here with us. We wanted to keep him and do it in a more long-term way but at the moment he’s with us and I think he should be really proud of where he is as well.”

The Arsenal fans will be hoping that the Aubameyang contract saga comes to an end after the Emirates FA Cup final since most transfer rumours claim that his future will be decided after that game.