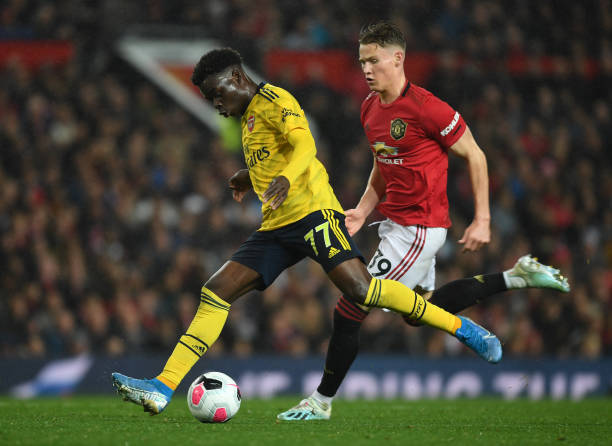 Arsenal youngster Bukayo Saka broke into the first team this season and he has in the last few months become one of the best players in the squad but what’s been worrying is his current contract at the Emirates Stadium will end in 2021. The gunners have however received some good news on their hopes of tying Bukayo Saka to a new big contract.

Bukayo Saka was used as a fullback in Mikel Arteta’s first months at the club because the gunners did not have cover at that position due to injuries but he was however still impressive as he got many assists and has also turned out to be versatile after Premier League restart as he’s now being used an attacking midfielder in the Arsenal squad.

LONDON, ENGLAND – FEBRUARY 23: Bukayo Saka of Arsenal passes the ball under pressure from Djibril Sidibe of Everton during the Premier League match between Arsenal FC and Everton FC at Emirates Stadium on February 23, 2020 in London, United Kingdom. (Photo by David Price/Arsenal FC via Getty Images)

Arsenal have for long been trying to renew the contract of Bukayo Saka and it’s now been reported by The Athletic that the North Londoners are now putting the finishing touches to the deal that would see the young Englishman stay at the Emirates Stadium for a long time. The report claims that Arsenal could even announce the contract extension of Bukayo Saka as early as this week and that this would be a huge boost for Mikel Arteta since the 18 year old has been one of the best players in the squad since his arrival.

Saka has made eleven assists and scored three goals this season and it looks like Mikel Arteta will try to turn him from a winger to a hybrid 8/10 that can play in a role that Kevin De Bruyne plays at Manchester City and so extending his deal at the Emirates Stadium will have surely been one of Mikel Arteta’s main worries as the last few games have shown that he could be the person to replace Mesut Ozil in midfield.