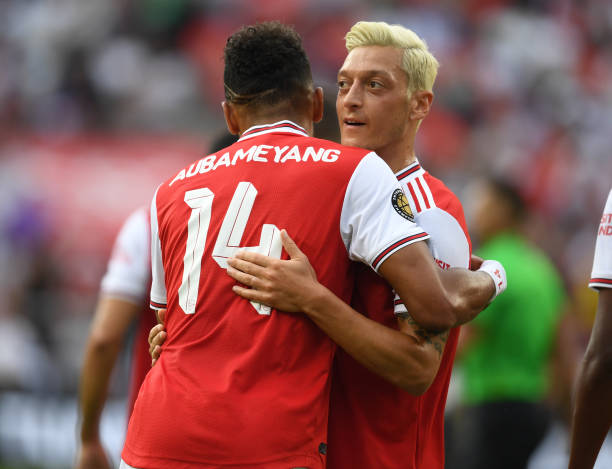 The Premier League has returned this weekend for the last time this season and Arsenal will face Watford at the Emirates Stadium with the hope of ending their league campaign on a high ahead of the FA Cup. Arsenal will tomorrow face Watford and here’s the predicted lineup of the gunners with all eyes on Pierre-Emerick Aubameyang and Mesut Ozil.

Even though Mikel Arteta will certainly want Emiliano Martinez to be fit ahead of the FA Cup final, the Arsenal boss will possibly still start him in the upcoming game as the only alternative is using a young goalkeeper.

Cedric Soares started in Arsenal’s last match and so he could be used in the final ahead of Bellerin in the final and so him, Tierney and Luiz might get rested in the game against Watford. So Arsenal will use a back four of Kolasinac, Holding, Sokratis and Bellerin.

Matteo Guendouzi hasn’t played for Arsenal since the Brighton incident but Arteta said that he will be available, and so he could be paired with Ceballos so that Granit Xhaka can be rested ahead of the FA Cup final.

Mesut Ozil hasn’t played for Arsenal since the Premier League restart but he could be given a chance in this game, in his favourite central attacking midfielder position with Aubameyang and Nelson on the flanks. Aubameyang will not be rested as he has a chance at getting the golden boot.

Alexandre Lacazette will be rested for the FA Cup final and so Nketiah will start in tomorrow’s  game against Watford.