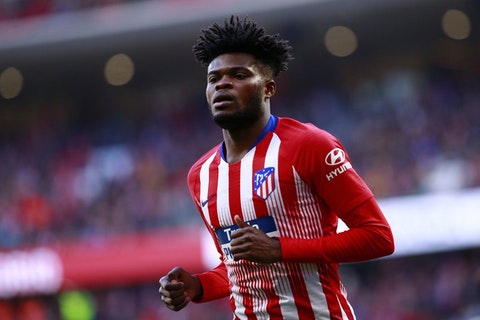 Arsenal will in the upcoming summer transfer window try to sign Thomas Partey because their head coach Mikel Arteta has made him their main transfer target as its believed that he would instantly improve the gunners. The gunners are however low on cash and it’s now being claimed that Arteta might have selected three players to sell to bring the Ghanaian international to the Emirates Stadium.

Thomas Partey has been linked with a move to Arsenal for years and he was even close to joining the gunners in last year’s summer transfer window but he however stayed at Atletico Madrid since the North Londoners had used most of their funds to bring Nicolas Pepe to the Emirates Stadium. Partey is however this time, Arsenal’s main summer transfer target but they will have to sell to get funds to active his €50million release clause.

The Daily Mail is reporting that Arsenal have chosen Matteo Guendouzi, Alexandre Lacazette and Lucas Torreira as the players that could be sold in order to raise funds to bring Partey to England. It is not surprising to see that Matteo Guendouzi is on this list since Arsenal’s current head coach Mikel Arteta hasn’t been impressed with the young Frenchman as he has even consistently left him out of matchday squads due to his attitude on and off the pitch.

The report claims that Arsenal are confident that Thomas Partey will want to come and join them but that the club will be making a loss hence their only option being trying to sell either one of Guendouzi, Torreira or Lacazette. Lacazette has struggled this season and he currently has just two years remaining on his current deal and if what Arsenal’s head of football Raul Sanllehi said is true, then the French striker will have to either be sold or be given a new deal.