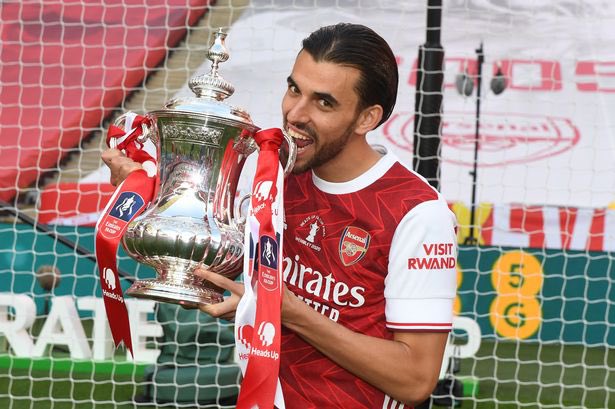 Arsenal completed the signing of Dani Ceballos on loan from Real Madrid in the 2019 summer transfer window and he has had a successful second half of the campaign as he was one of the best players in the road to the FA Cup victory. Dani Ceballos has however given some bad news to the gooners in these joyous times.

Arsenal head coach Mikel Arteta has repeatedly revealed how he wants the gunners to keep Dani Ceballos ahead of the upcoming season and the fans have also enjoyed having him in their squad in the past few weeks but it looks like it is not certain if he will be returning to the Emirates Stadium.

Dani Ceballos scored the winning goal in the FA Cup quarter finals against Sheffield United and then had a stellar performance against Manchester City, and also was impressive in the final hence the fans calling for him to be permanently signed. Ceballos faced the press after the game and revealed that he was happy to have won it, and said that he will now return to Real Madrid and hint at not coming back as saying that he is proud that he is a player of the Madrid club.

“It’s a satisfaction to have won the FA Cup. I’m thrilled to end the season with a title. Real Madrid have remained close to me throughout the season, not just now. I’m grateful for that. I spoke to the Real Madrid president Florentino Perez, who has congratulated me for the title.”
Ceballos told Spanish radio station Cadena SER.

“From today, I am a Real Madrid player and I’m happy about that. Real Madrid have an important game against Manchester City and from then on, I will talk to the club and discuss my future.”

It is still unknown if Arsenal will indeed try to resign Dani Ceballos but Mikel Arteta hasn’t been afraid of telling everyone how happy he is with the Spanish midfielder’s performances.

Breaking News: Arsenal start talks to bringing Willian to the Emirates this summer

Report: Two Arsenal transfer targets that could be signed after the winning of the FA Cup