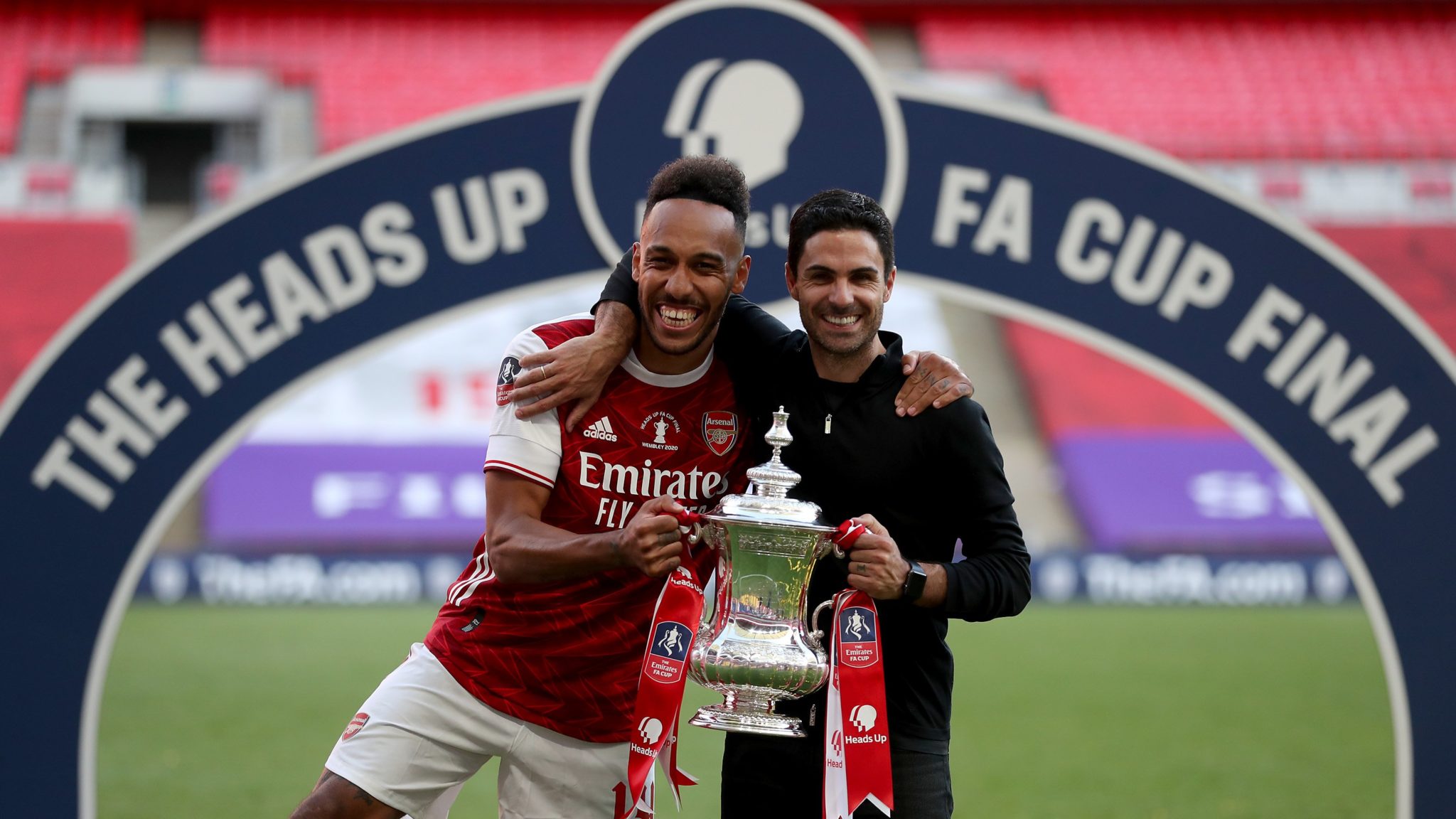 The gunners were on Saturday crowned the Emirates FA Cup Champions after beating Chelsea 2-1 thanks to two goals from Pierre-Emerick Aubameyang. Aubameyang once again stepped up for the gunners in the FA Cup final and put on a captain’s performance and everyone is curious to know if he will stay, and Mikel Arteta has provided an update.

Aubameyang has entered the final year of his contract at Arsenal and he is yet to put pen to paper to a new deal and most gooners were so happy that they have not only won the Emirates FA Cup but that they might have done something that could keep the Gabon international at the club as there were reports that he would stay at the Emirates Stadium if they play in an European competition.

Arsenal head coach Mikel Arteta who has always been positive when asked about Aubameyang’s contract situation was once again put on the spot to answer whether Aubameyang would stay at the club and sign a new deal with them. Mikel Arteta said that he is positive that Aubameyang will stay based on the talks he has had with him and his people (family or representatives).

LONDON, ENGLAND – AUGUST 01: Pierre-Emerick Aubameyang scores the 2nd Arsenal goal during the FA Cup Final match between Arsenal and Chelsea at Wembley Stadium on August 01, 2020 in London, England. Football Stadiums around Europe remain empty due to the Coronavirus Pandemic as Government social distancing laws prohibit fans inside venues resulting in all fixtures being played behind closed doors. (Photo by Stuart MacFarlane/Arsenal FC via Getty Images)

“Well, you asked me my opinion and that’s the feeling I get with conversations with him and his people, but obviously nothing is done yet and I want to enjoy the victory. Thanks to Auba again for the performance that he had and how much he helped the team.” Mikel Arteta told Arsenal Player.

“I hope so. Everything is based on my conversations with him, how he sees his future, what I expect from him, the team that I want to build around him and the conversations I have with the people who are very influential around him.”

“The club, we all respect and admire him, the players are all behind him. We know the players that we have and we have to value him. I think if we reach all of those points, we’ll make progress.”

There was a bit of joyous drama when the Arsenal squad was preparing to take their squad photo of lifting the trophy but what happened is gunners captain Aubameyang dropped it. Arteta was asked about this and he had a wonderful reply for this.

“It can happen! I think it can happen, he needs more experience with trophies! We can get him used to that.” said Arteta.