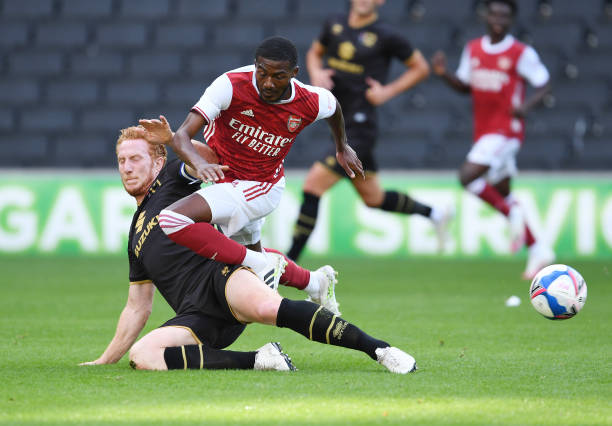 Ainsley Maitland-Niles has had a rough time since he broke into the Arsenal first team as he was forced to play as a make shift right back due to the club having no options in that area and this happened once again at the start of last season and he showed his dissatisfaction of playing there when Arteta arrived hence getting benched.

Arsenal’s head coach Mikel Arteta did however have a change of mind at the last few weeks of last season as the young Englishman featured for the gunners in some important games like the semi final against Manchester City and the final against their London rivals Chelsea which they won. It is however clear that the chances of him playing in his favourite midfield roles are low at Arsenal and its believed that he wants a move away from the Emirates this summer and Wolverhampton Wanderers seem to be the most interested club.

A report by The Telegraph says that Ainsley Maitland-Niles will indeed join Wolverhampton on a four year deal in this 2020 summer transfer window in a deal that would see the gunners pocket £20million but the gooners were however shocked to see him in their squad that faced MK Dons in their first pre-season game. Maitland-Niles played the full 45 minutes of the game and the Arsenal fans have begun theorizing that this could have been the last time he is seen in their colours before a possible move to Wolves.

LONDON, ENGLAND – AUGUST 01: Pierre-Emerick Aubameyang celebrates scoring his and Arsenal’s 2nd goal with Ainsley Maitland-Niles during the FA Cup Final match between Arsenal and Chelsea at Wembley Stadium on August 01, 2020 in London, England. Football Stadiums around Europe remain empty due to the Coronavirus Pandemic as Government social distancing laws prohibit fans inside venues resulting in all fixtures being played behind closed doors. (Photo by David Price/Arsenal FC via Getty Images)

It is reported that Wolves manager Nuno Espírito Santo wants Ainsley Maitland-Niles in his squad ahead of the new season because the 22 year old is a versatile player that is able to play in many positions be it left back, right back, right winger, left and right wing back. The Arsenal fans have mixed reactions on the possible departure of Maitland-Niles but most are sad as they believe that this decision could come back to haunt them in the future.

Report: Atletico Madrid tell Arsenal to choose one player on three players to be used in Lacazette swap deal