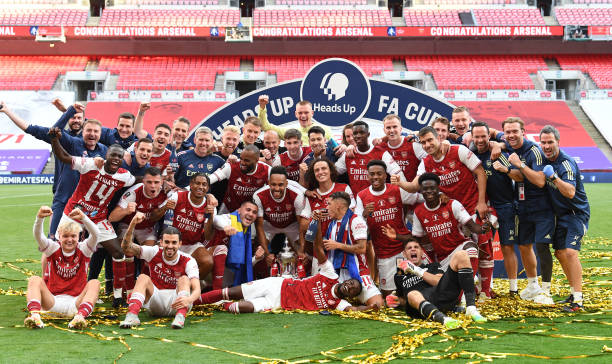 Arsenal and Chelsea faced off at the Wembley Stadium in the Emirates FA Cup yesterday and the gunners came out on top as they won the game 2-1 to get their hands on this trophy for the 14th time. Winning the FA Cup not only gave Arsenal silverware but also gave them qualification to Europe and this could be very important in their transfer business.

Arsenal have been linked with various players in the last few weeks and we are going to take a look at two players that could join the gunners in this summer transfer window after their success in the Emirates FA Cup.

Thomas Partey has been the most linked player with a move to Arsenal over the last few months and the interest of the gunners in him didn’t just begin this year but rather last year when it was claimed that Unai Emery wanted him at the Emirates Stadium. It’s now been widely reported that Mikel Arteta has made him his main summer transfer target and winning the FA Cup might help the gunners finally get their man.

Thomas Partey has a release clause of €50million and qualifying for the UEFA Europa League will earn the club £30million and so this could be able to give the club enough push to try and get the Ghanaian international as he is a player that would improve them. The appeal of being in Europe will also be a very important factor because players usually want to play for clubs in the European competitions.

It’s already been claimed that Thomas Partey is interested in a move to Arsenal and that the two clubs will have to reach an agreement, and that could happen in the next few weeks as the gunners got more funds after winning the FA Cup.

Philippe Coutinho will return to Barcelona after his loan spell at Bayern Munich comes to an end and it’s been reported and confirmed by his agent that the Brazilian international will try to come back to the Premier League since he has failed to fit into the system that the Catalan club uses.

The gunners will be hoping to get him on a loan deal and they will now come with the added bonus of being in Europe which could be important in luring the 27 year old to the Emirates Stadium as the other club interested in him, Tottenham Hotspur will have to go through three qualifier games before going to the UEFA Europa League group stages.