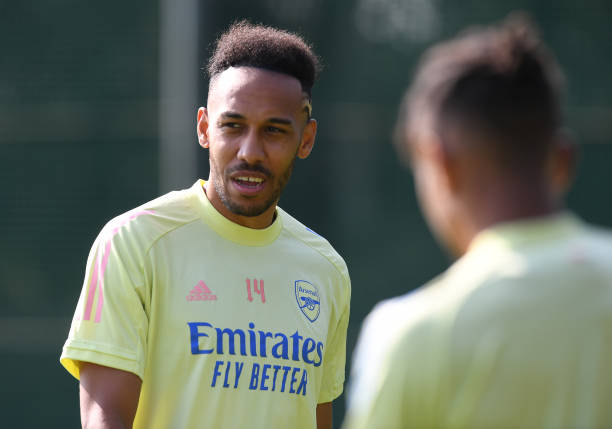 Arsenal striker Pierre-Emerick Aubameyang recently put pen to paper to a new three-year contract despite many reports that had claimed that he would ditch the North Londoners to go to another club that would quickly get him trophies. The Arsenal captain has revealed the two most important things that saw him stay at the Emirates Stadium.

Pierre-Emerick Aubameyang arrived at Arsenal in the 2018 winter transfer window and he has turned out to be an incredible signing as he has since then scored 72 goals hence him signing a new contract being very important for the North London club. Aubameyang was heavily linked with a move away from Arsenal as clubs like Barcelona and Inter Milan were keeping an eye on his situation at the Emirates Stadium.

Aubameyang was very quiet during his whole transfer saga but he has started opening up on things that happened in that period and he has revealed the two important things that have saw him decide that he will sign the new three year contract from his current club. Aubameyang says that Arteta and his love for the club and the fans saw him stay at Arsenal despite interest from many clubs.

“Two things persuaded me to stay,” he said. “The first thing was Mikel Arteta, because since he came in he brings a lot of positivity and a new philosophy for us.” Aubameyang told Sky Sports.

“I think that was important because it matched my game and I feel that I can improve with him. I think this was the key factor and as well, the love that I receive from the fans and the whole club.”

“I was like ‘I feel good since you came, I’m improving, and the philosophy is very, very nice so I just want to stay’ and he was like ‘I’m sure if you stay you can leave a legacy, but it’s all about you and what you want. Of course you can leave and go for trophies in big clubs as well but I think you can create a legacy here in this great club.”

Has Mesut Ozil already played his last game in an Arsenal shirt?