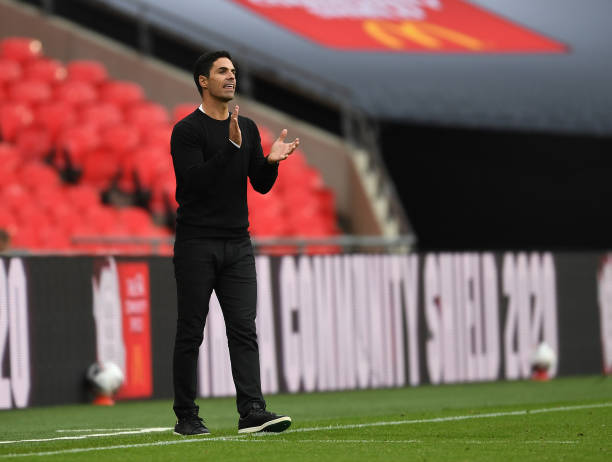 The 2020/21 Premier League season will kickoff on Saturday and Arsenal will kick it off as their game against Fulham will be the opener and we today take a look at the expected lineup from Mikel Arteta. Mikel Arteta will want his Arsenal side to start the season with a win and so here’s the possible lineup that he might go with on that day.

Emiliano Martinez has been impressive for Arsenal ever since Bernd Leno got injured and so it will be no surprise if he starts the season as the main goalkeeper as he is yet to put a foot wrong.

Arsenal have two new centre backs in Saliba and Gabriel but Arteta will of course not immediately play them together immediately as it’s their first time in the Premier League. Gabriel has been training as per pictures and could be paired with Luiz on Saturday while Bellerin and Tierney play as full backs in a back four.

Arsenal have resigned Dani Ceballos and he was among the players that took part in a friendly a few days ago and so he is likely to be in the squad that faces Fulham this weekend. Ceballos had a great partnership with Xhaka last season and so there is no reason to stop this well developing pivot.

Mesut Ozil could be brought back to the squad as per reports and so he is expected to be in the starting eleven that faces Fulham. Ozil will probably play in his favourite central attacking midfield position while Aubameyang and Willian play as wingers since Arteta has shown that he is reluctant to play the Gabon international as the main striker.

Alexandre Lacazette is Arsenal’s senior centre forward and so he will probably start in the game against Fulham.

REVEALED: When Arsenal will announce the new contract of Aubameyang