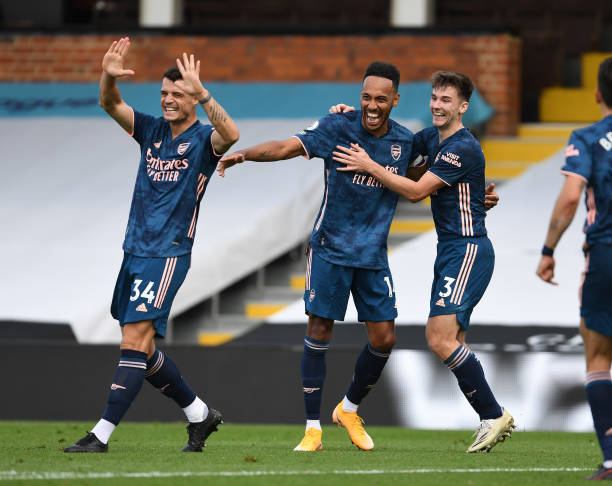 Arsenal will this weekend face West Ham United at the Emirates Stadium and Mikel Arteta will want the gunners to once again get all the three points as they will be expected to beat such sides if they want back UEFA Champions League football. Mikel Arteta will be tasked with picking the right lineup for the game and so here is the early predicted Arsenal lineup to face West Ham United at the weekend.

Bernd Leno is Arsenal’s first choice goalkeeper and so he will be in between the goal posts at the weekend when West Ham United make a visit to the Emirates Stadium.

It has now become pretty clear that Arsenal manager Mikel Arteta will not abandon the three at the back system until the club gets his midfield fixed and so the three that played there last week are expected to play together once again. The three man defence will consist of Tierney, Gabriel and Holding.

Ainsley Maitland-Niles and Hector Bellerin were both impressive in Arsenal’s 3-0 win over Fulham a few days ago and so they will start in this game as well.

Mohamed Elneny started in the previous game but it’s predicted that he will be dropped on Saturday for Dani Ceballos as its believed that the Spaniard didn’t start in that game due to not being fully fit as he had spent a few days with his teammates. So Granit Xhaka and Dani Ceballos will be responsible for connecting the defence and attack in Saturday’s game against West Ham United.

A lot of people were surprised to see Pepe not start last weekend but it was also obvious to see why Arteta opted for Willian as the winger helped in build up play and was also great at pressing and so he will again start in the game against the Hammers with Aubameyang on the opposite flank while Lacazette leads the line.

Report: Rob Holding makes a decision on his future at Arsenal after West Ham’s interest