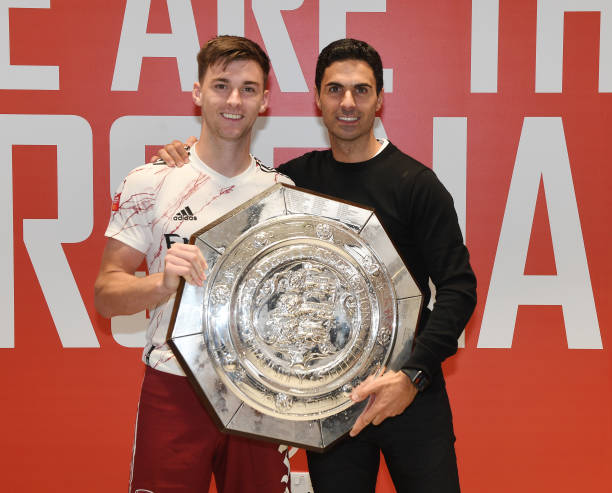 Arsenal completed the signing of Kieran Tierney last year and he was one of their best players at the end of last season hence him becoming a fan favourite. Kieran Tierney has revealed what he believes has been the biggest thing that Mikel Arteta has brought to the club in his first eight months as a manager of a top flight club.

Arsenal sacked Unai Emery in November, 2019 after the gunners had a poor start to the new season and after a month with Freddie Ljungberg in the interim head coach role, the club decided to appoint Mikel Arteta who had at that time not coached any club at that time as he had been Pep Guardiola’s assistant for three years. Kieran Tierney was injured at that time but he however played most of Arsenal’s games after the lockdown and was even in the starting eleven that won the Emirates FA Cup and the recent FA Community Shield.

LONDON, ENGLAND – AUGUST 01: (L-R) Kieran Tierney and Hector Bellerin of Arsenal pose for photos with the trophy after the FA Cup Final match between Arsenal and Chelsea at Wembley Stadium on August 01, 2020 in London, England. Football Stadiums around Europe remain empty due to the Coronavirus Pandemic as Government social distancing laws prohibit fans inside venues resulting in all fixtures being played behind closed doors. (Photo by Stuart MacFarlane/Arsenal FC via Getty Images)

“The winning mentality means a lot in football, the manager wants to bring that to Arsenal because they’ve obviously gone through a spell were the fans weren’t happy, the club was not happy and the players weren’t happy, we were not achieving what we wanted to achieve.” Kieran Tierney told Sky Sports.

“Him coming in and knowing what the club was about [helped], knowing it needed success and trophies, Arsenal need to be high up in the league as well.”

“From me learning there and hopefully bringing a bit of that here [to Scotland] it’s going to benefit everyone.”

Report: Mikel Arteta gets told who to play on Martinez and Leno ahead of new PL season