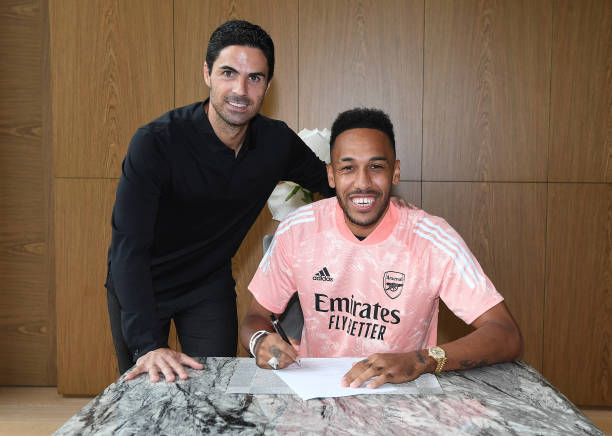 Arsenal striker and captain Pierre-Emerick Aubameyang has today finally put pen to paper to a new contract to extend his stay at the Emirates Stadium for three more years. This news comes at the perfect time for everyone associated with Arsenal as the season has just begun and their manager Mikel Arteta has also given his thoughts on Aubameyang finally signing the new deal.

Pierre-Emerick Aubameyang has been exceptional since he made he had his debut for Arsenal in 2018 and has since then been their top scorer as he even got the Premier League golden boot after scoring 22 league goals in the 2018/19 campaign. The gunners were awful last season but he however still scored 22 Premier League goals and was even influential in them winning the Emirates FA Cup as he scored all their four goals in the semi finals and final.

Mikel Arteta who got appointed as the new Arsenal boss has definitely been glad that he arrived when he has such an incredible player like Aubameyang in his squad. Arteta is obviously among those happy that Aubameyang signed a new deal and he has said that it was important that the 31 year old was kept at the club as he has a great mentality.

“It was important for Pierre-Emerick to stay with us.  He’s a superb player with an incredible mentality. Being the player to have taken the least amount of time to reach 50 goals with this club tells you everything you need to know about him and his way of working.” Mikel Arteta Arsenal Player.

“He’s an important leader for the team and a big part of what we’re building. He wants to be up there with the best players in the world and leave his mark. He can achieve that here.”

Report: Rob Holding makes a decision on his future at Arsenal after West Ham’s interest