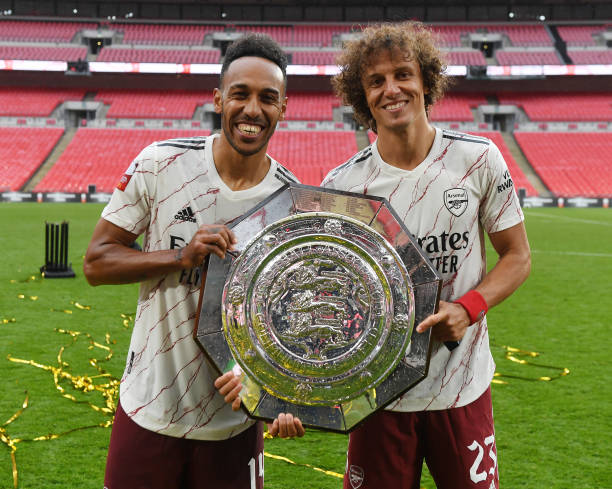 ( Aubameyang and Luiz / Photo via Getty )

The Premier League returns this weekend for game week two of the 2020/21 campaign and Arsenal will face West Ham United at the Emirates Stadium, and so we take a look at the lineup that we expect Mikel Arteta to use in this game with all eyes on Pierre-Emerick Aubameyang and David Luiz.

Arsenal goalkeeper Bernd Leno will start in goal against West Ham United as he is fully fit and his main competitor Emiliano Martinez has left the North London club to join Aston Villa.

David Luiz did not take part in Arsenal’s 3-0 win over Fulham due to an injury but he will however be available for selection as confirmed by Arteta in his press conference on Friday. All eyes will be on him as to see how he performs along Tierney and Gabriel in a back three defence since Arteta looks set to continue using the 3-4-3 system.

Ainsley Maitland-Niles was on the verge of an exit from Arsenal a few weeks back but he seems to have impressed Arteta in the wingback position and so him and Hector Bellerin will start in the encounter with The Hammers.

Dani Ceballos and Granit Xhaka had an outstanding partnership last season and so Mikel Arteta will want this duo to continue playing together, and so it is believed that they will start in Saturday’s game.

Arsenal confirmed a few days ago that their captain and star striker Pierre-Emerick Aubameyang has signed a new deal and all eyes will be on him to see how he performs after committing his future to the North London club. The front three will consist of Aubameyang, Lacazette and Willian as it was in the game against Fulham.