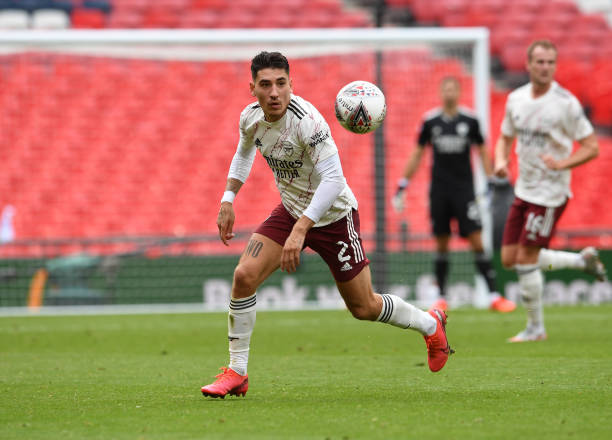 Arsenal right back Hector Bellerin has been linked with a move away from the Emirates Stadium this summer and Paris Saint Germain have shown the most interest in the Spanish international as it is believed that they did submit a low bid for him a few days ago. A new report has today revealed that Arsenal have set an asking price for Hector Bellerin.

Hector Bellerin didn’t feature a lot for Arsenal last season since the campaign started when he was still on the sidelines but he however became fully fit in the last few weeks and was very important in the games that saw the North Londoners win the Emirates FA Cup for a record 14th time. It’s however been reported that Bellerin might be looking for a move away from Arsenal since he is looking for a new place after having been in England for many years.

Arsenal will of course not be willing to sell Hector Bellerin but a report by The Independent says that they have put an asking price of £35million for the 25 year old right back who was attracted interest from French Ligue one side Paris Saint Germain. The report claims that Paris Saint Germain are leading the race for Bellerin and that Arsenal would use the funds got from his sale to pursue their midfield targets since that is one of the areas that they want to improve in this summer transfer window.

Bellerin has been quiet on the transfer rumours linking him with an exit from Arsenal this summer hence some fans believing that he could indeed leave the North London club as he was in the past always quick to distance himself from the reports that were saying that he was joining Barcelona.

Report: Arsenal to only sell Emiliano Martinez to Aston Villa under one condition