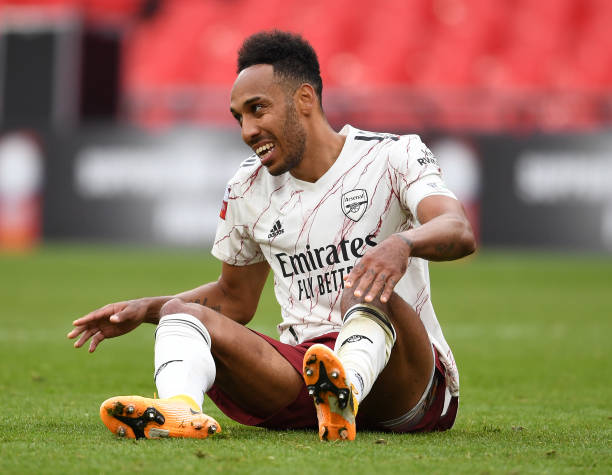 Pierre-Emerick Aubameyang has been at Arsenal since 2018 and Arsenal have spent the last few months trying to convince him to sign a new deal and it’s reported that he has indeed signed a new three year contract as per various sources but the fans want the club to make everything official since the new Premier League season is about to begin.

Pierre-Emerick Aubameyang has been impressive for Arsenal in the years he has spent in England as he was even their player of the season after he scored 29 goals in all competitions in the 2019/20 campaign hence the club getting underpressure to tie him down to a new deal since some other top clubs like Barcelona and Inter Milan were starting to show interest in the 31 year old Gabon international.

The Arsenal fans have been waiting for weeks for the club to announce the contract extension of Aubameyang but its now been revealed by a report by ESPN which confirms that their sources have told them the announcement of the new deal of the gunners captain will be made in the next few days and that it could even come before Saturday’s Premier League match against Fulham. The Arsenal fans will be pleased if Arsenal does announce the contract extension of Aubameyang before their season opening game against Fulham because they have waited for confirmation for many weeks.

LONDON, ENGLAND – AUGUST 29: Pierre-Emerick Aubameyang of Arsenal during the FA Community Shield match between Arsenal and Liverpool at Wembley Stadium on August 29, 2020 in London, England. (Photo by Stuart MacFarlane/Arsenal FC via Getty Images)

Aubameyang has been careful in his words as he has neither confirmed that he has signed a new contract with Arsenal or whether he will leave the club this summer but the likelihood of him staying, and extending his stay at the Emirates Stadium is high as all signs show that he is enjoying his time at the North London club. Arsenal head coach Mikel Arteta will also be happy if Aubameyang stays at the club as he has many times said that the striker is needed if they are to rebuild and start challenging for trophies.