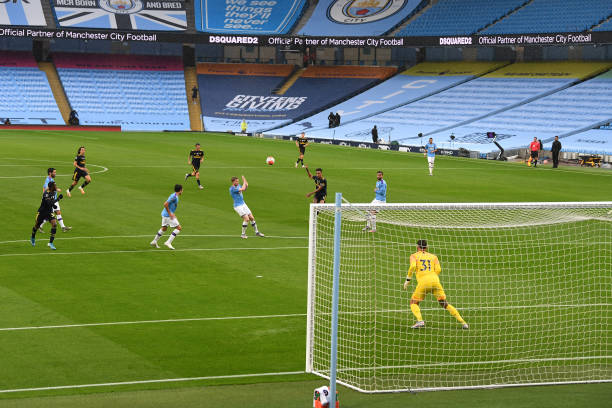 Arsenal will next week make a visit to Manchester to take on Pep Guardiola’s Manchester City and this will be a special game as it will be the third time Mikel Arteta faces his former employers but the North Londoners have however received bad news ahead of this game.

Most Arsenal players were allowed to go and represent their countries and among those was Kieran Tierney who joined The Scottish National Football team but one of their players tested positive of COVID-19, and their federation claimed that the gunners left back was among those that was believed to have been in contact with one that got the virus. Arsenal recently released a statement on this matter and confirmed that Scottish FA had recommended that Kieran Tierney self isolates for 14 days starting 8th of this month to make sure that he also didn’t get the COVID-19 virus.

LONDON, ENGLAND – SEPTEMBER 12: Kieran Tierney of Arsenal during the Premier League match between Fulham and Arsenal at Craven Cottage on September 12, 2020 in London, England. (Photo by Stuart MacFarlane/Arsenal FC via Getty Images)

This is very bad news for Arsenal as the self isolation of Kieran Tierney would see him miss their Premier League game against Manchester City at the Etihad on Saturday next week and this will affect their performance since the 23 year old has been one of their best performing players in the games against the big sides. Arsenal manager Mikel Arteta has been using a 3-4-3 formation in the matches against the big sides and Tierney plays at the left of a three man defence and last season proved that Kolasinac doesn’t fit this role as he made a huge mistake in the North London Derby at the Tottenham Hotspur stadium.

Arsenal left back Kieran Tierney was asked about the situation and he claimed that he was disappointed and frustrated but confirmed that he had followed all the regulations.

“I’m so disappointed and frustrated to be in this situation. I have adhered to all regulations and made sure I was socially distancing from my team mates in the hotel.” said Tierney.

“I’ve also tested negative. I know Arsenal and the SFA are now in discussions with the Scottish authorities to gain a further understanding.”