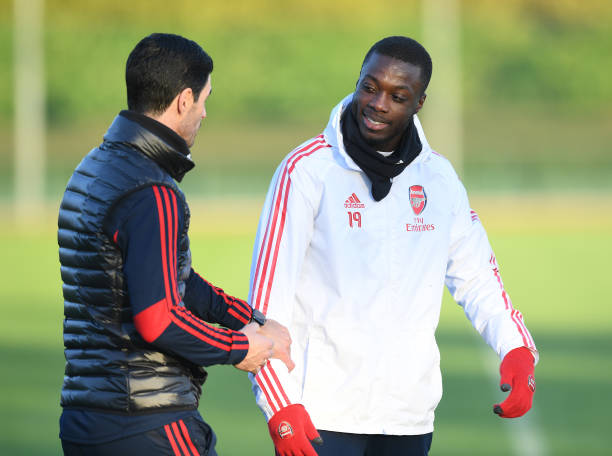 Arsenal’s record signing Nicolas Pepe has struggled in his time at the Emirates Stadium since making the £72million deal from Lille in the 2019 summer transfer window. Pepe had a great end to his first campaign in England a few months ago but he has however struggled to get a start in the Premier League this season under Mikel Arteta.

Nicolas Pepe started in almost all of Arsenal’s last matches of last season and he was very influential in them winning the Emirates FA Cup as he got an assist in the semi final game against Manchester City and then in the final against Chelsea but the arrival of Willian seems to have reduced his chances of a spot in the starting eleven as he has only started once in the Premier League this season.

Nicolas Pepe started in Arsenal’s 3-0 win over Dundalk in the UEFA Europa League on Thursday and Mikel Arteta was asked why the Ivorian international was not starting in the Premier League in this year’s campaign. The Arsenal manager then explained on what he needs from Pepe with the main point being that he wants consistency during the games. Nicolas Pepe has so far assisted once and scored twice for Arsenal in all competitions this season.

LIVERPOOL, ENGLAND – OCTOBER 01: Nicolas Pepe of Arsenal takes on Takumi Minnamino and Marko Grujic of Liverpool during the Carabao Cup fourth round match between Liverpool and Arsenal at Anfield on October 01, 2020 in Liverpool, England. Football Stadiums around United Kingdom remain empty due to the Coronavirus Pandemic as Government social distancing laws prohibit fans inside venues resulting in fixtures being played behind closed doors. (Photo by David Price/Arsenal FC via Getty Images)

“It’s about finding the consistency, not through the games but during the games as well to be more incisive, and do the right things on many occasions when he has to make the right decision on the pitch.” Mikel Arteta told Sky Sports.

“It’s nothing to do with his attitude. He’s a player who takes risks, a very creative player – that’s the most difficult thing in football, when the opposition know what you can do, how much they want to prevent the space, and creating situations from that is complicated.”

“But sometimes it’s the simple things, the deliveries, the amount of situations he’s able to create or attract and then make the right decision to keep evolving that phase of play. For example, the finishing, the position inside the box, he has to be more consistent at it. We’re working on it, and hopefully he will be doing it much more efficiently.”