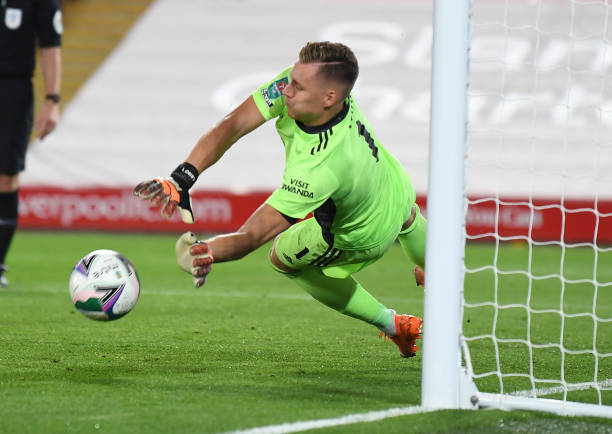 Arsenal goalkeeper Bernd Leno was given the man of the match award on Thursday after the gunners beat Liverpool in penalties with him saving two of them in the Carabao Cup. The gunners came into this match just a few days after they had lost 3-1 to Liverpool in the Premier League but they however this time had a great game and progressed to the Carabao Cup quarter finals thanks to incredible saves from Bernd Leno during normal time and then the two saved two penalties.

Bernd Leno has faced a lot of criticism in the last few weeks due to the departure of Emiliano Martinez as some part of the Arsenal fanbase thought that the Argentinian international shouldn’t have been sold and that he should have instead been made the first choice goalkeeper. Leno was recently criticised for his performance in the 3-1 loss to Liverpool but he however was very incredible in today’s game and has now sent back a message to those that were doubting him.

Emiliano Martinez won the hearts of the Arsenal fans in the few games he played and so some fans were starting to doubt whether Bernd Leno should stay as the first choice goalkeeper but he has however sent a strong message to them saying, that the club has shown to him that he is the number one and that he also believes in himself to be the one leading the club in the goalkeeping department.

“The club has always given me the feeling I was the number one, I am the number one and will be the number one. My job is to prove it every week and I feel I have done that tonight.” said Leno as quoted by Football.London.