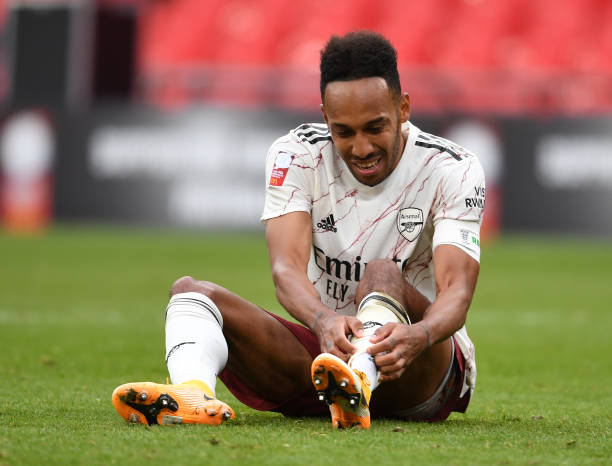 Last month Arsenal captain Pierre-Emerick Aubameyang signed a new 3 year contract worth close to £350,000-a-week putting an end to speculation about his future.

With 72 goals in 115 appearances Aubameyang is Arsenal’s source of goal. He almost single-handedly won Arsenal the FA cup and Community Shield.

But the Gabonese striker has only managed to score one goal this season in five games which has brought many questions and criticism.

Not just his goal returns but generally his performance on the pitch has reduced by some levels. Before he signed his contract he was all over the pitch, tracking back, making tackles, charging forward during attacks.

That hunger and intensity in his game is missing at the moment this season,if he is to look at his stats before and after signing the new deal he will notice something is wrong.

Arsenal manager Mikel Arteta with Pierre-Emerick Aubameyang as he signs a new contract on September 15, 2020 in London, England. (Photo by Stuart MacFarlane/Arsenal FC via Getty Images)

Perhaps maybe the new lucrative contract has made him relax, many times players work their socks off when their wages are lower and when they earn the big money their form dips. Auba’s focus and zeal may have been on landing the big money contract now he may have lost that motivation.

This wouldn’t be a new case, Arsenal fans can recall Mesut Ozil’s performances before he was rewarded with the controversial £350k-a-week contract. Since then his football career has declined and the Arsenal managers since Arsene Wenger have deemed him “unfit” for playing.

However, it is early on in the season and too early to jump to conclusions that Aubameyang’s form has gone down since the new contract but this is something worth keeping an eye on as the season progresses.