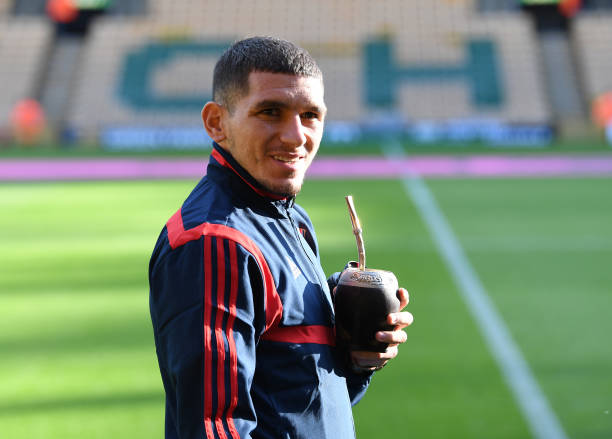 Arsenal announced the arrival of Thomas Partey from Atletico Madrid on the summer transfer window deadline day after activating his release clause of £45million. Arsenal midfielder Lucas Torreira also on the same day made a move to Atletico Madrid on a loan deal with an option to buy clause and he has today commented on Partey going the other side.

Lucas Torreira has failed to establish himself as a starter in Mikel Arteta’s first starting eleven and he this season seemed to want a move away from the Emirates Stadium and he finally got one as Atletico Madrid requested to sign him on a loan deal which had an option to buy clause and even though he probably would loved to play with Thomas Partey in the Spanish LA Liga, he has however sent him a nice message on his move to the North London club.

“He (Thomas Partey) is going to a club where I was treated very well and that’s the most important thing.” Lucas Torreira told reporters.

The Arsenal fans will be happy that Lucas Torreira had this to say to about Partey’s move to the North London club as he wasn’t in good terms with the club when Unai Emery was still in charge at the club but he seemed to have put that in the past after Mikel Arteta arrived. It’s not known whether Atletico Madrid will permanently sign Lucas Torreira next summer but it’s however likely as he could be Partey’s replacement.

Report: Mikel Arteta could be forced to not register two Arsenal stars in the Premier League squad

Report: How Arteta’s Arsenal will lineup after the arrival of Thomas Partey